It was a good week for the Lion City Sailors. Aurelio Vidmar’s charges followed up on their 6-1 thrashing of Tanjong Pagar United last Friday (Nov 13) with a 3-1 victory over Hougang United on Tuesday (Nov 17) to make it three successive wins in the Singapore Premier League (SPL).

Here we round up the three major talking points from the two matches that kept the Sailors firmly in the hunt for the SPL title, with just five matches left to play.

How things can change in a short span of time in football. Just a couple of weeks ago, the Sailors would struggle to find their rhythm in the first half, before turning on the style in the latter stages of the game. That issue has since been put to bed, with the Sailors scoring within the first 15 minutes for the past three matches – including the 7-1 thrashing of Balestier Khalsa that kick-started the winning streak.

In the past two outings, Aurelio’s men looked purposeful on the ball and knew exactly what they had to do to get into the groove early on and execute what was worked on in the training ground the past week.

Against Tanjong Pagar, the team smelled blood after Kaishu Yamazaki opened the scoring with a header off Shahdan Sulaiman’s corner, and kept going for more to seal the three points by half-time with an almost unassailable 4-0 lead. Against Hougang, they found the breakthrough via Gabriel Quak’s sublime free-kick in the 12th minute and came close to scoring on several other occasions in the first-half. While they were only able to take a one-goal lead into the break, the work they did in the first-half helped set the tone for what was to come in the second period.

Scoring and wrapping up the three points early on also meant Coach Aurelio had the luxury to rest some key players for the last half-hour to keep them fresh for the title run-in, especially given that the five remaining matches of the SPL will be played in the span of just two weeks. 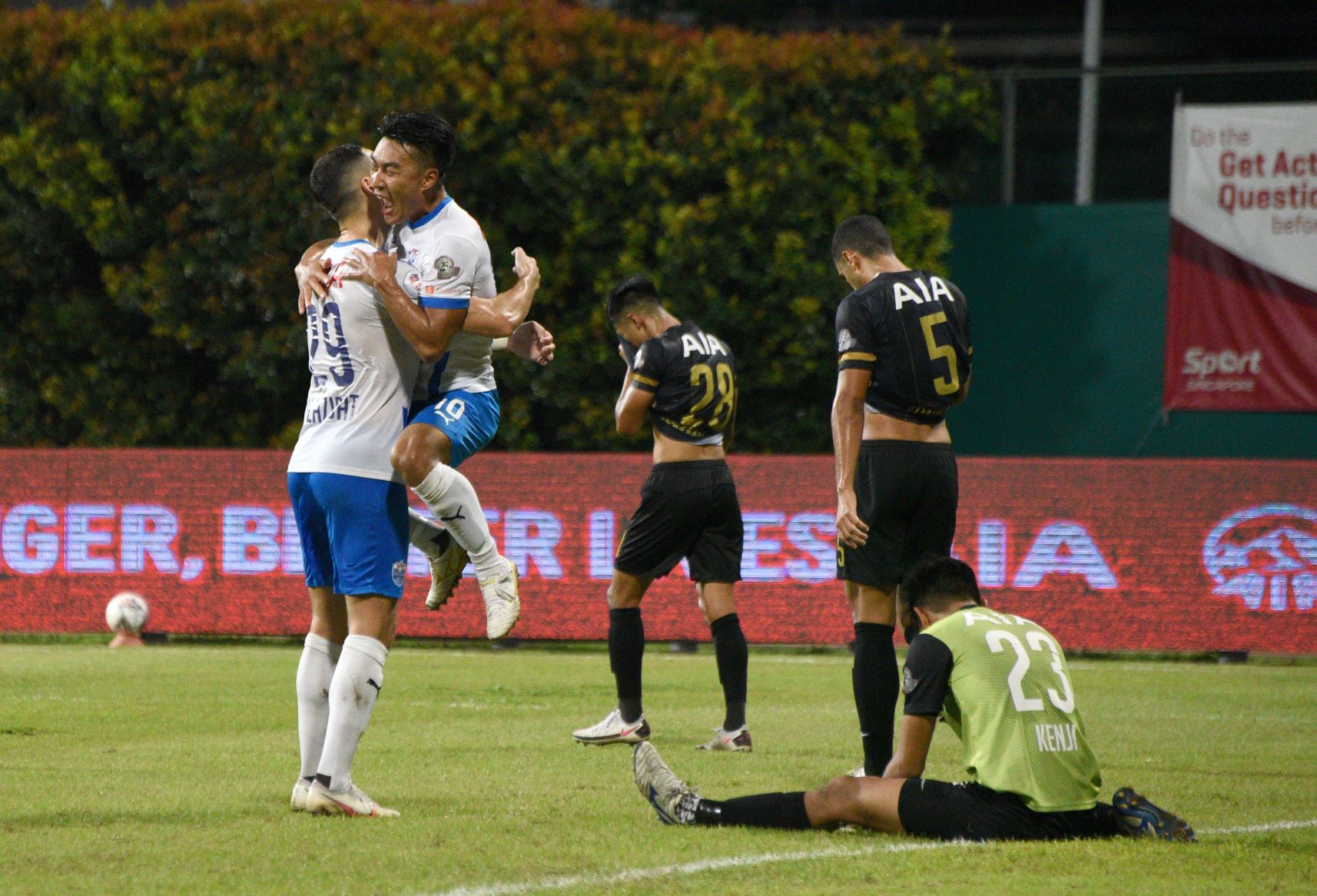 After the first two matches of the season, in which the Sailors attained just one point, the team came in for much criticism, and many wondered what exactly Coach Aurelio’s philosophy was.

Well, his ideas are now taking flight, and the Sailors’ identity is getting clearer with each passing match. For Coach Aurelio, it is all about dominating opponents and playing as much in the attacking half as possible to unlock opposition defences. While the team tried to implement this philosophy in the first few matches as well, the Sailors often ended up with little to show for back then, perhaps due to a breakdown of play in the final third.

However, with more training sessions and matches under their belt, the players now have a better understanding of each other’s style, and are hitting all the right notes in attack. The flow of their play has improved in recent games, as evident in the quick interchange of passes and near-telepathic movement between the attackers.

The best example was perhaps Song’s goal in the win against the Jaguars – the Incheon native exchanged a couple of quick passes with Stipe Plazibat, before breaking into the penalty box and firing home from close range.

It was a move that took all of five seconds to execute, and perfectly encapsulated the sort of attacking play that Aurelio’s Sailors have been drilled in.

There was also Adam Swandi’s second goal in that same game, which saw him instinctively run into space to meet Gabriel’s neat backheel pass with a first-time finish.

Another example of a slick Sailors attacking move came in the game against Hougang, with Gabriel smartly releasing full-back Aqhari Abdullah, who then squared across goal for Hafiz Nor to convert from close range. These well-worked goals are no coincidence – it is all down to the hard work on the training ground by the players and coaching staff alike, to execute Aurelio’s vision of a possession-based game that relies on quick passes in the final third to break down defences.

We’ve got the firepower 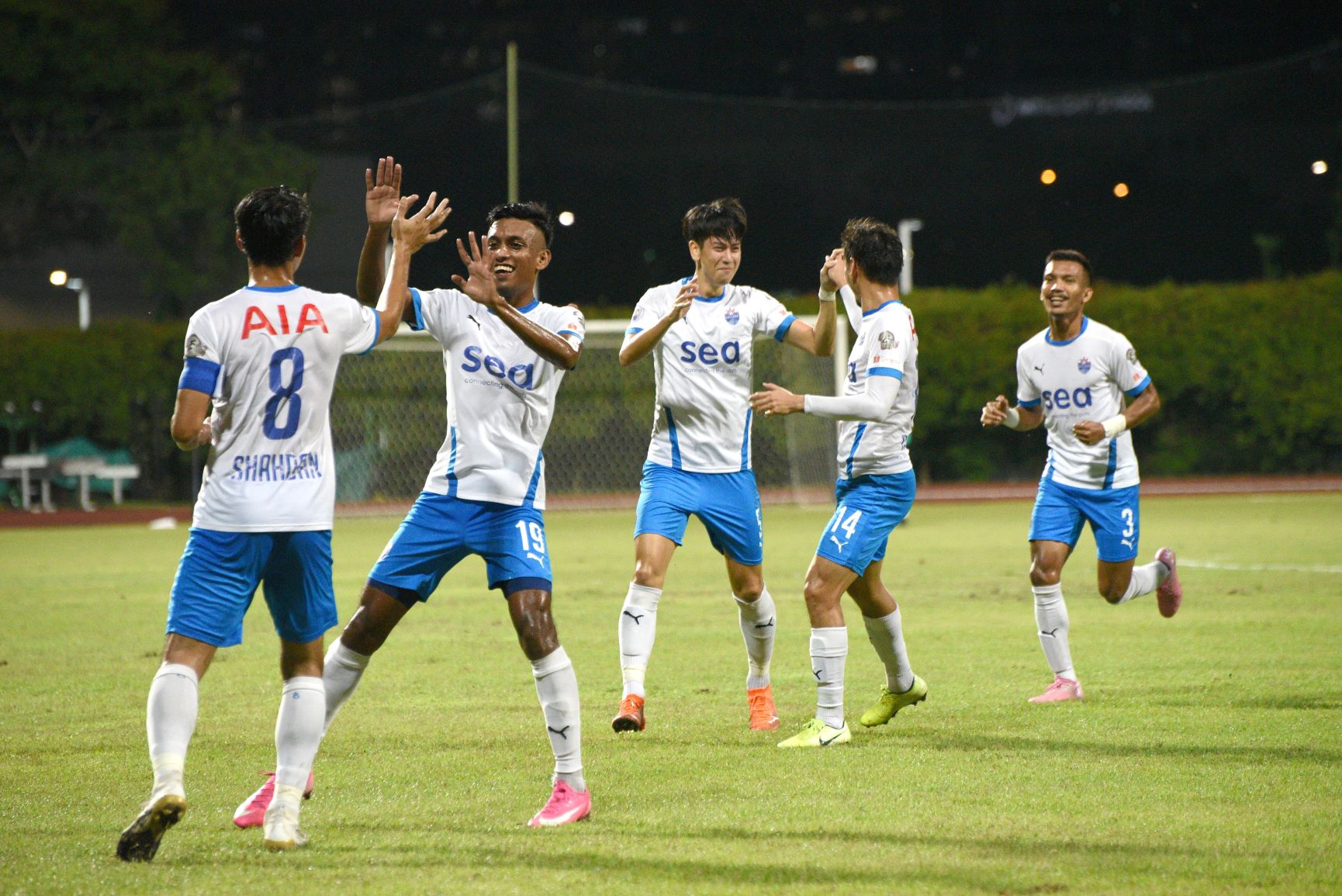 It was a worrying sign for the Sailors when Stipe went off early against Hougang due to a hamstring problem, and understandably so – the 31-year-old has been in stellar form since his arrival in September, contributing to an incredible nine goals and five assists in just seven matches.

But even if he were to be unavailable for the next couple of matches, the Sailors will still have enough firepower at their disposal to cope. The past couple of matches have shown that the team is not solely reliant on Stipe for goals, with the rest of the players proving capable of picking up the slack in terms of scoring as well – in fact, the Sailors currently have the most number of scorers in the league, with 11 different players having already found the back of the net so far this season.

The Sailors have also become more lethal from set-pieces, with Shahdan often wreaking havoc with his wicked deliveries, and Gabriel getting in on the act as well with his first professional free-kick goal against Hougang.

Confidence is also growing amongst the other attackers, with Hafiz netting his first goal of the season against the Cheetahs, while Adam, who has found the net four times already this season, looks stronger with each substitute appearance. Experienced forward Shahril Ishak is also back with the team after a five-game absence, and looked lively in his cameo appearance against Hougang. And while Song missed the game against Hougang due to injury, he should be back for this weekend’s clash against Albirex to bolster our attacking options.

Of course, the Sailors look a more complete side with Stipe. But, in the unfortunate event that he misses a game or two, the names mentioned above can definitely still form a fluid strike force on their own, and carry out Coach Aurelio’s philosophy to break down stubborn defences. 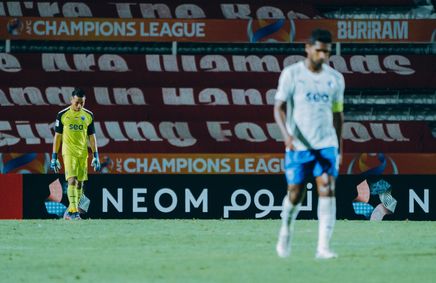 A night to forget, but Sailors’ ACL adventure far from over