Hafiz Nor enjoyed his most productive season in 2019, recording nine goals and two assists in all competitions with Home United. That form earned him a recall into the Singapore national team, and he went on to score a memorable winning goal in the Lions’ surprise 2-1 away win against Yemen last November.

Starting the new campaign with the Lion City Sailors, Hafiz was looking to carry on where he left off, but saw his momentum disrupted as the Singapore Premier League (SPL) was halted for nearly seven months due to the COVID-19 pandemic.

Nonetheless, the nippy winger has toiled hard in all six of the Sailors’ SPL games this season, and has impressed with his work rate and tireless running down the flanks.

The only thing missing from his game at the moment? Goals.

But the lack of output in the final third has done little to dampen Hafiz’s confidence, and he is determined to rediscover his best form sooner rather than later.

“I know I’ve not been very consistent in the past few games and there’s definitely room for improvement,” said Hafiz, who has made five starts and one substitute appearance for the Sailors this year.

“I have to work it out with the midfielders and be more successful in my penetrative runs to contribute more to the team.  But I’m not panicking because that’ll only affect my performances even more. I’m taking it one game at a time; I’ve faith that I will get momentum if I keep trying to make things happen.”

At 32 years of age, Hafiz is one of the most experienced Sailors in the squad alongside the likes of Shahril Ishak, Hassan Sunny and Shahdan Sulaiman. And he is relishing the role of playing mentor to the team’s young wingers in Haiqal Pashia and Arshad Shamim – because he believes they will both go on to carve out great footballing careers.

“They are players with great potential and it’s a pleasure for me to see them progressing well with each training session,” he said. “Haiqal is great with both feet and Arshad’s a bit similar to me with his speed.

“They just need more exposure at this level and I’m happy to share some bits of advice based on my experience for them to improve in certain areas. I’m sure in years to come, we’ll see them called up to the national team.”

So far, it has been a mixed bag of results for the Sailors since the league restarted three weeks ago, with two wins, one draw and one defeat under their belt. Aurelio Vidmar’s charges are now seven points adrift of pacesetters Tampines Rovers, but Hafiz is adamant that the title is still within their grasp.

“There’s still more than half of the season to go, and several points up for grabs,” said the veteran who is now into his 10th professional season after making his league bow with Tanjong Pagar United in 2011.

“Of course, it’s not easy because every team that plays against us treats it like a final. They really want to beat us because we’re one of the top teams in Singapore. But we just have to give our 100 percent, follow Coach Aurelio’s game plan, and I’m sure we’ll string together a good run of results to challenge for the title.”

Up next for the Sailors is a tricky game against a high-flying Balestier Khalsa side on Saturday evening (Nov 7), which sets up an interesting duel between Hafiz and his cousin Zaiful Nizam, Balestier’s goalkeeper and captain. Marko Kraljevic’s side are currently third in the table after achieving two straight wins since the restart.

Previously as Home United, the team won just one of their last seven encounters against Balestier in all competitions. That came in a 4-2 comeback win last May, in which Hafiz played an integral role with two goals and an assist.

“That was a really memorable game for us and for me personally,” he recalled. “If we play with that kind of never-say-die attitude, we will surely be able to beat them on Saturday.

“Balestier is a team which tends to be more on the aggressive side and that is perhaps why they’re pretty tough to beat. But Coach Aurelio has a game plan – we just have to go out there to execute it and get the three points to climb up the table.” 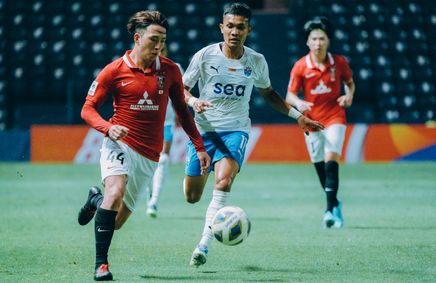 Beaten, but not broken: Defeat, but positives to draw on in Sailors’ ACL debut