Football is nothing without fans.

The adage has long been relegated to the sporting cliché dump, alongside the likes of “we’re taking it a game at a time”, and “we gave 110 percent.” But the ongoing COVID-19 pandemic has seen a bright spotlight turn to stands in stadiums across the globe, and pulled the stark reality of the adage back to the forefront of the sporting psyche – it is true.

In the Singapore Premier League (SPL), it has become clear that passionate fandom is alive and kicking.

The SPL was played behind closed doors in various pockets of the 2021 season, and the silent scream from empty stands was conspicuous, and wildly so. Once fans were allowed back in, the electricity in the air at stadiums across the island was palpable – and on the pitch, it sparked higher tempo, higher intensity football matches.

A number of the Lion City Sailors’ best performances this season have come when there are fans in the stadiums, with attacker Gabriel Quak adamant that the vociferous support has “brought life” to football matches. 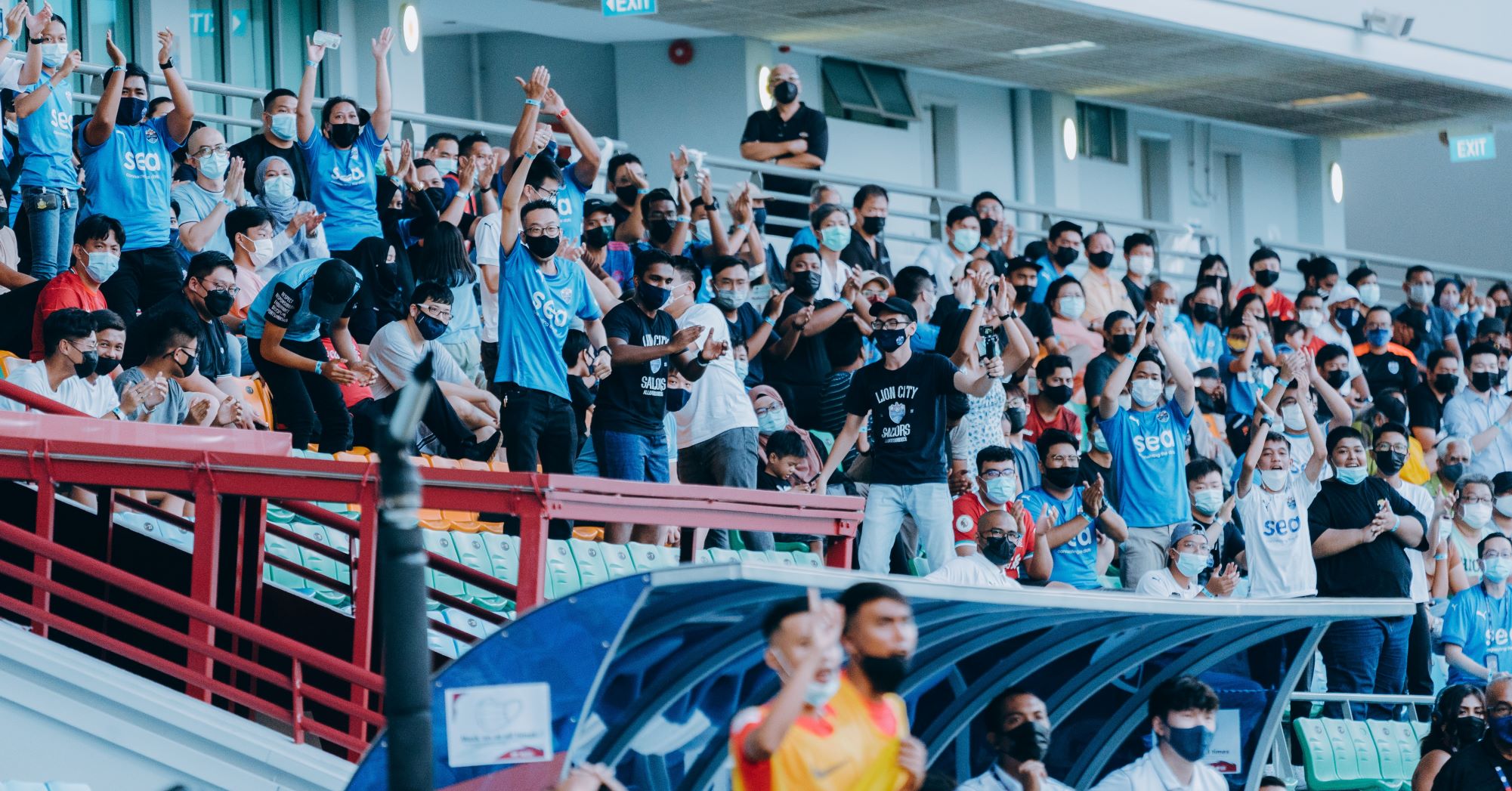 “Fans in the stadium definitely make a huge difference – while in Singapore we can only have 1000 fans now, compared to the 30,000 or 50,000 in Europe, but the impact is still significant,” said the 30-year-old.

“You can feel the euphoria from the stands whenever we score, and with every tackle we make. Whether you’re chasing the game or trying to hold on to a lead, the fans give us an extra push and extra energy.

As the Sailors surge towards their first-ever league title, the interest for the game here has grown and recent sell-out crowds at their matches at the Jalan Besar Stadium underscores the point.

For the top-of-the-table clash with defending champions Albirex Niigata (S) some weeks ago, fans were spotted queuing up for the tickets even three hours before the game with the allocated quantity of 1,000 quickly snapped up. It is a welcome sight that Gabriel hopes can be built on into the seasons to come. 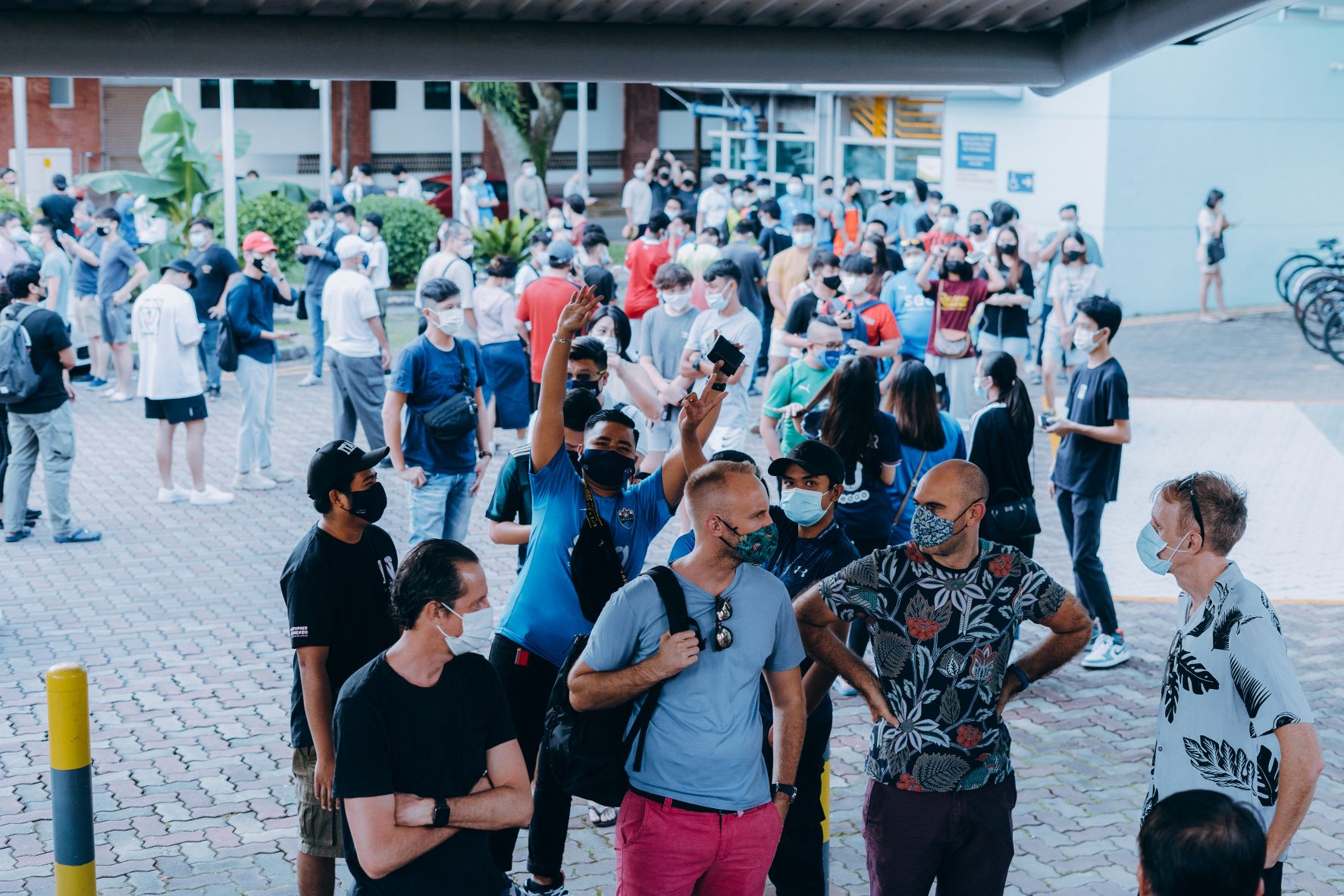 “It’s such a great feeling to see so many people queuing up when we arrive at the stadium on match day. Be it having 10 or 1000 fans, every one of them count because they make the effort to turn up,” he acknowledged.

“I hope it’s not a COVID-19 thing, with watching football one of the few things that people can do despite the restrictions we have in Singapore. Hopefully we can progress from here to having 2,000 or even 4,000 fans in the stadium.

“I guess fans feel good about watching the game in a full-house stadium where you look to your left, right, up and down, there are people watching with you. Likewise, we feel great about having their support up close.” 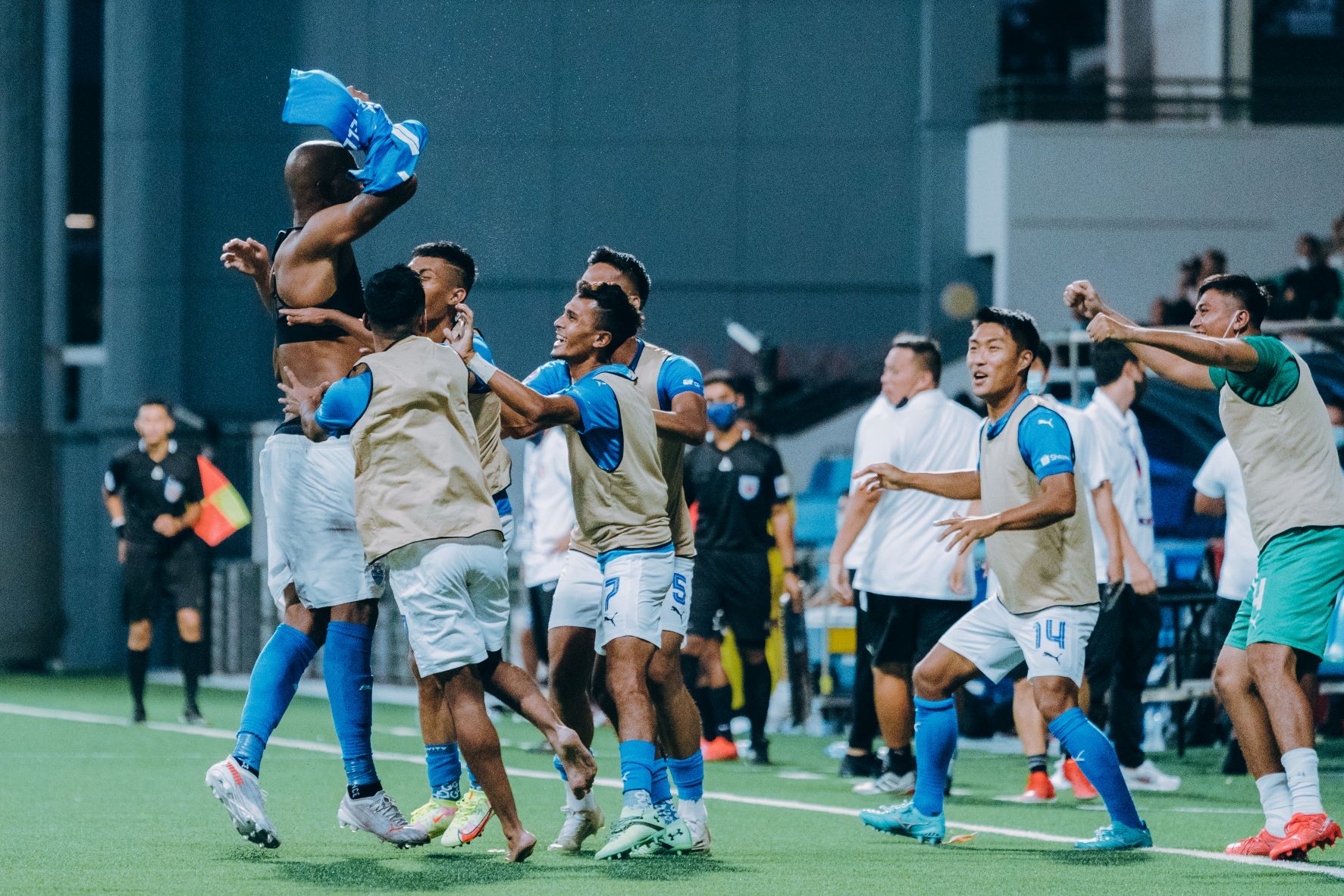 September’s Young Lions fixture was one that stuck out in Gabriel’s mind. The 2020 SPL Player of  the Year believes the fans truly made a difference in the 3-1 win that saw the Sailors come from a goal down to win courtesy of a rare double from Jorge Fellipe.

“It wasn’t an easy game, but when Jorge scored the equaliser we could feel the force coming from the stands and that pushed us to go for the winner,” he recalled.

“And when he scored again, he took off his top and the whole team went to celebrate in front of the fans. It was just such a great moment to savour and honestly that could not have happened in an empty stadium.”

For Sailors fans, it has been such a stop-start season in terms of changing regulations. With the first five matches of the season being played behind closed doors, conditional entry was finally granted to 250 fans in early April as long as they produced proof of a negative COVID-19 test result. 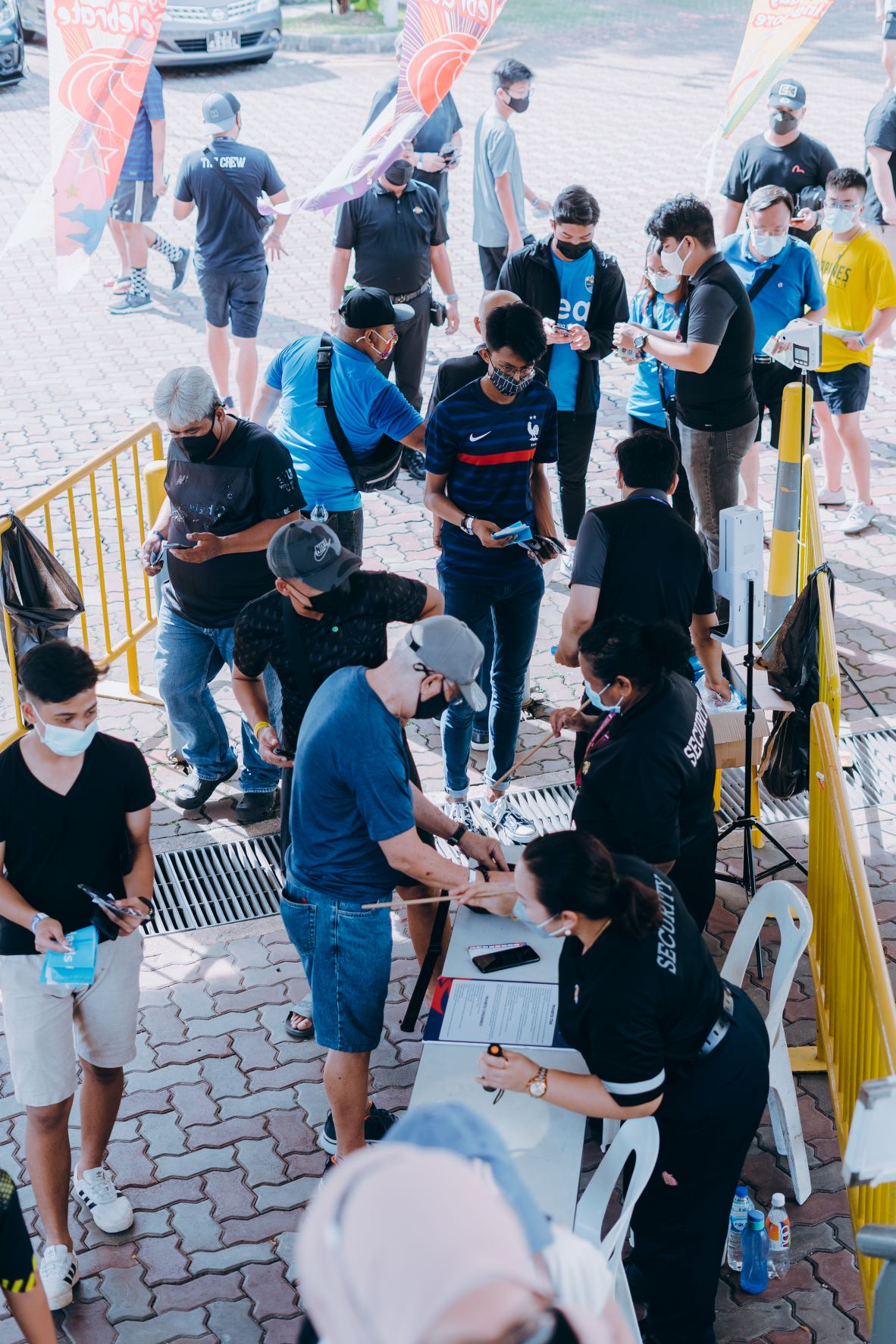 That only lasted for three rounds, before reverting to the status quo for the whole of May (three matches) due to a rising number of cases. When the league resumed in late July, 100 fans were allowed in (for two matches) before the number was raised to 500 in August (one match) and subsequently 1,000 (six matches since) from mid-August onwards.

During the period when fans were not allowed in, the Sailors organised online watch-alongs via Zoom for a number of matches and it was an initiative Sailors fan Eddy Hirono was very appreciative of.

“We’ve very thankful of what the club has done for us – these watch-alongs were crucial to helping us fans get to know each other and feel more connected to the club,” said the 33-year-old in-house lawyer.

“It’s nice that they got youth players from the club to join in these sessions, so we were just having fun asking Adib (Nur Hakim) and Justin Hui questions from hairstyle and their personal lives to who’s the joker in the dressing room.”

Eddy, who is part of a 30-strong official Sailors fan club, The Crew, is one who has attended every Sailors game possible this season. He believes the most important aspect of being physically present at the stadium is the fellowship with like-minded individuals from all walks of life. 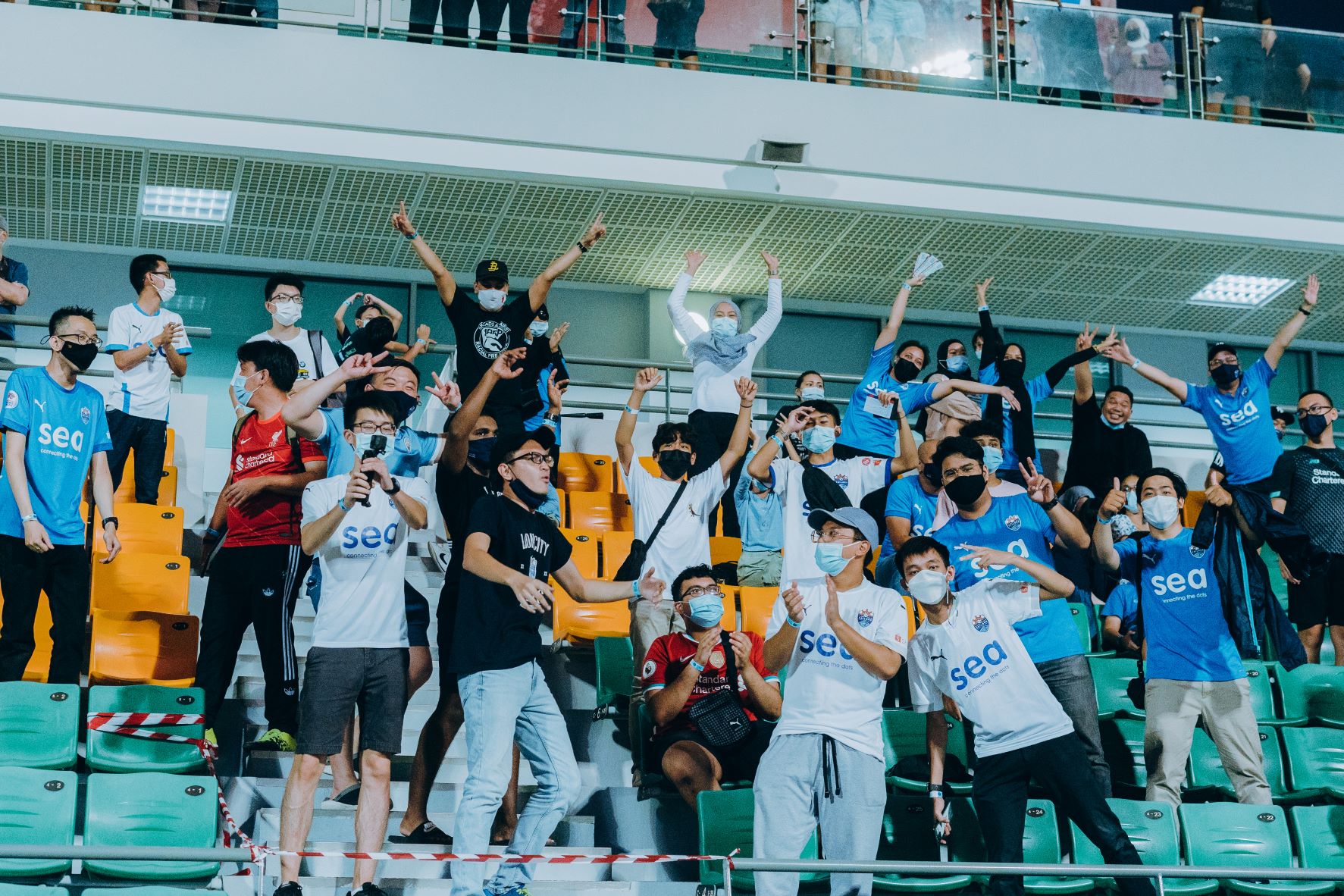 “It’s so heartening to see people from anywhere and everywhere – there are some makciks sitting with us and even a six-year-old boy, whose dad trusts him to sit with us,” he revealed. “Nur Adam’s (Abdullah) family usually sits very near us and they always thank us for supporting him, which is very nice.

“At the moment, we cannot bring in things like drums. But the supporters have been great in improvising – be it by whacking the chairs, stamping their feet or just clapping very loudly. There’s also a bit of healthy banter with opposition fans – which is all fun and games really.

“This is just the start and hopefully we can get more people together as time goes along – we want to be the consistent voice for this football club.

For Eddy, being at a match means he can live through the whole range of emotions as a football fan, and he is definitely going to be there in the stands as the Sailors look to cross the finish line against Balestier on 10th October.

“I recall that Albirex game where there was everything – the euphoria and the party atmosphere after going 1-0 up, then that layer of tension knowing one goal will change the whole title equation,” said the long-time supporter, who started supporting the club in 2012 in its previous iteration as Home United.

“While we did not hold out for the win, that’s what we fans live for – to experience all these emotions of a football match, it’s not just about the victories. I hope to see the club win the title this Sunday, but if we don’t, I wouldn’t be too disappointed. Because it’s a matter of time before we pick up trophies,” said Eddy. 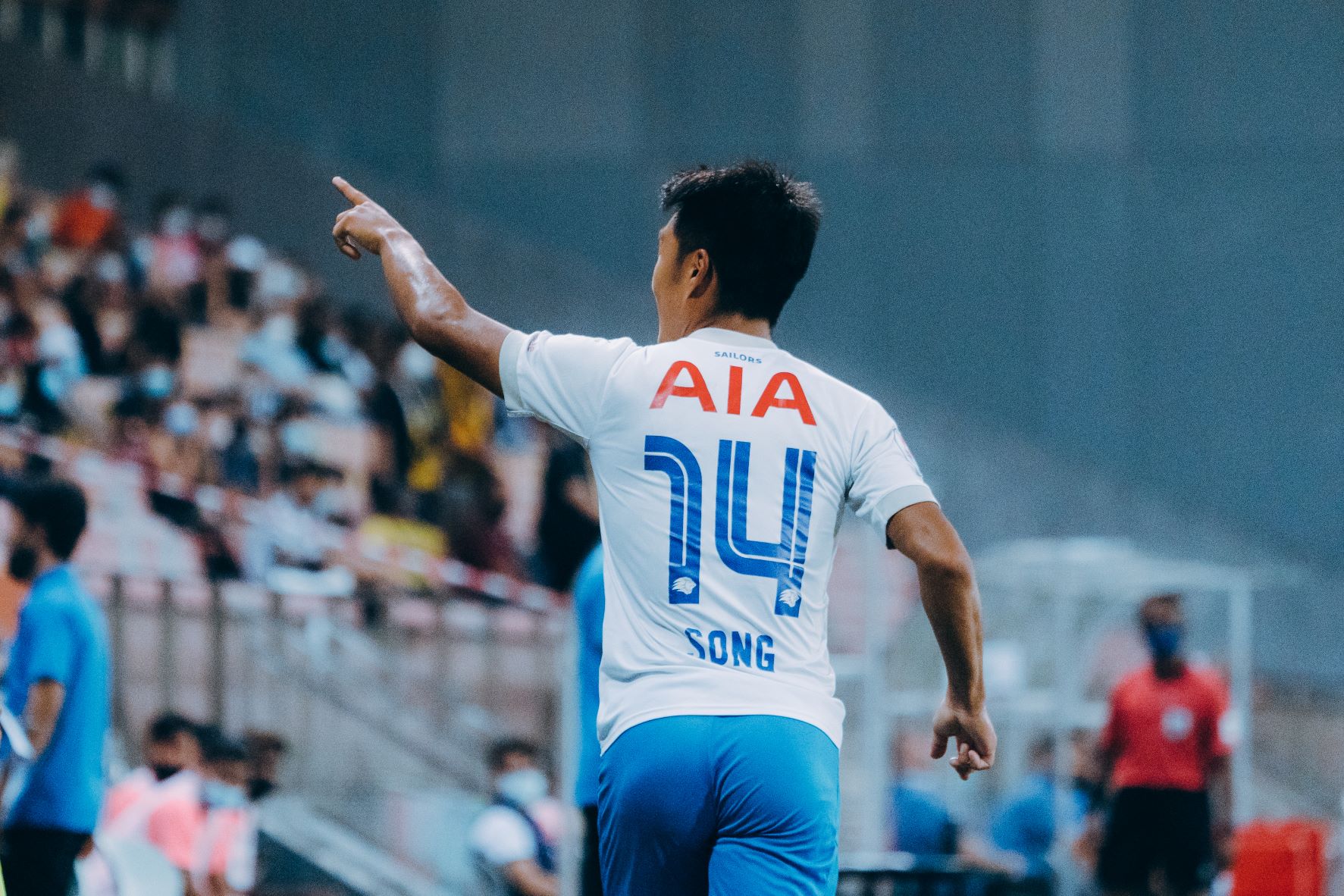 Buoyed by the unwavering support from the fans, Sailors attacker Song Ui-young wants to make sure they do not go home disappointed this Sunday.

“I know how much our fans love us and how they would love to see a local team win the title after so long,” said the newly-minted Singaporean. “The fans are part of our football family and we cannot exist without them.

“I know many of them are excited for this last match against Balestier. We’re going to be very well prepared for this match because we want to lift the trophy in front of all our fans. We want to give them something to cheer about because they deserve it for all their support.”