The Lion City Sailors put up some scintillating football in their 2020 Singapore Premier League (SPL) debut, but finishing third in the eight-team standings was clearly not good enough for a club with a long-term goal of achieving excellence in the region.

Ahead of the 2021 season, the Sailors pulled out all the stops assembling an improved squad to put up an even stronger challenge for the title.

Quality local acquisitions came in the form of Faris Ramli, Amirul Adli and Nur Adam Abdullah, then came the eye-catching signings of Brazilian duo Jorge Fellipe and Diego Lopes. Diego’s arrival captured the imagination of the fraternity – the former Benfica midfielder came at a price of S$3 million from Portuguese top-flight side Rio Ave.

Not the best of starts

All eyes were on the Sailors as they looked to avoid the previous season’s slow start that saw them pick up just one point from their opening two matches.

Hosting 2020 runners-up Tampines Rovers in a mouthwatering opening-day clash, Aurelio Vidmar’s men got off to a flyer. They went 2-0 up within the first six minutes and led by 3-1 early into the second half. But a quick-fire Yasir Hanapi brace meant they spurned two valuable points in a thrilling 3-3 draw.

A first win of the season would come soon as the Sailors emphatically thrashed Tanjong Pagar United 5-0, but they were then handed a rude wake-up call next, convincingly beaten by Hougang United in a 3-1 defeat. Make no mistake about it – the Sailors did not deserve to get anything out of that game. It seemed like a case of history repeating itself. With just four points from their opening three matches, the Sailors already needed to play catch-up with 2020 champions Albirex Niigata (S). 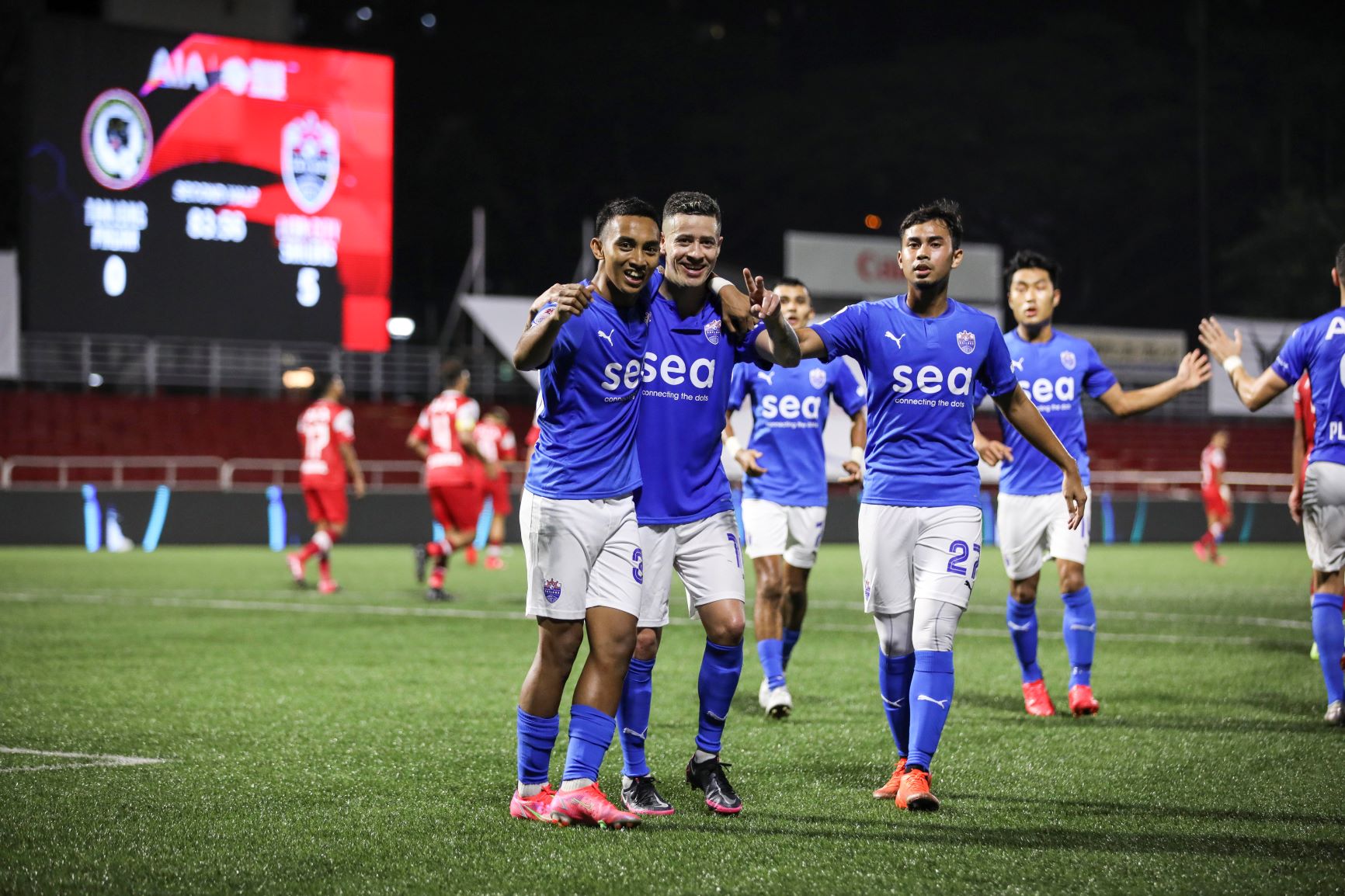 Bouncing back with a 3-1 win over Young Lions, the Sailors’ defensive frailties continued to haunt them, conceding a couple of goals through set-pieces in the first of three encounters against Albirex. They did rally and manage to come from two goals down to rescue a 2-2 draw late on, but being fourth in the standings after five matches played saw question marks over the Sailors’ credentials for the SPL title.

Hitting the winning notes despite a change of coach

An 8-0 demolition of Geylang International proved to be the tonic the Sailors needed, kick-starting a great winning run. A 4-1 drubbing of Balestier Khalsa soon followed with a number of quality goals, including Gabriel Quak’s stunning first-time volley was eventually named the Goal of the Year. 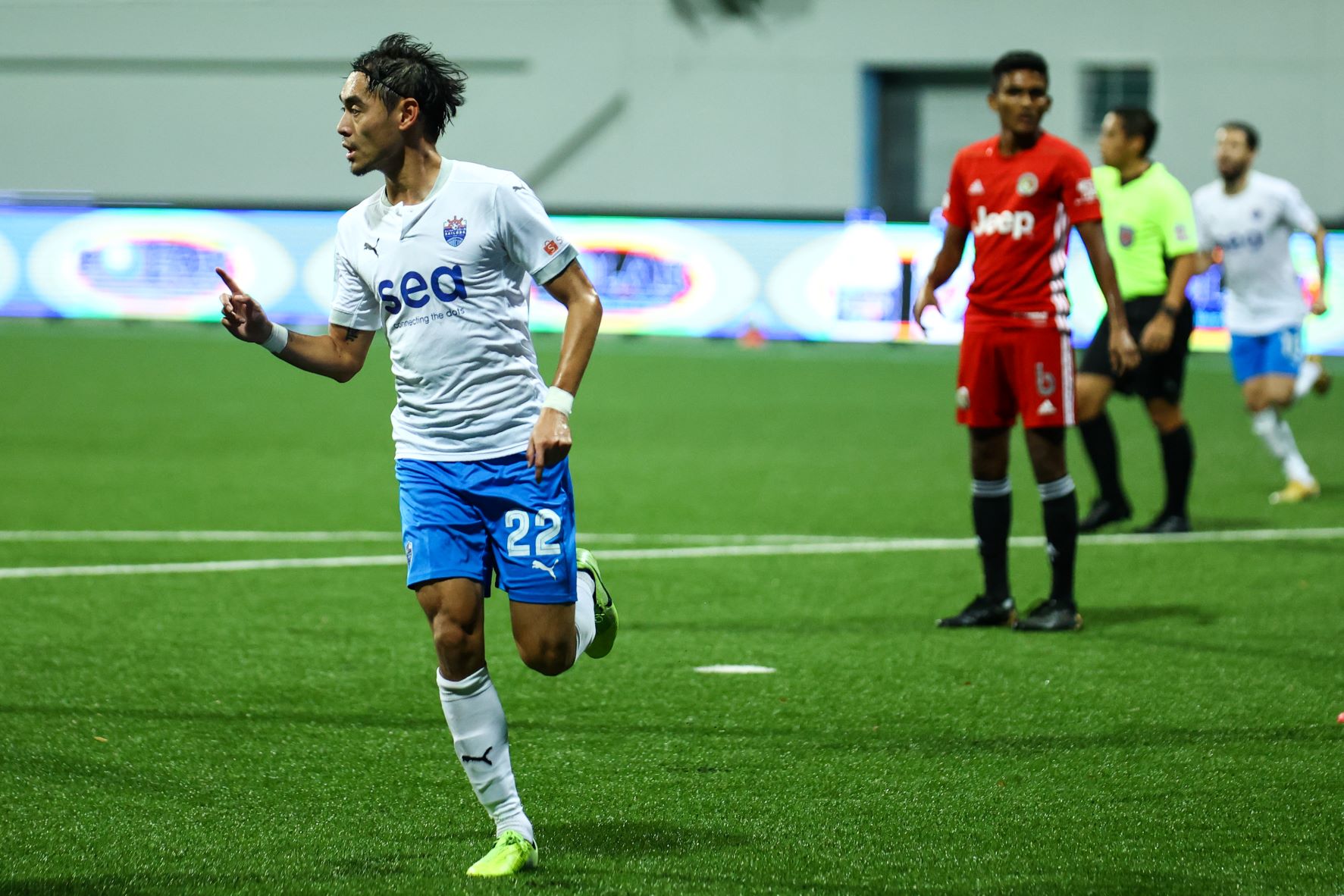 The Sailors then exacted revenge over Hougang in a 1-0 away win with star man Diego netting a physics-defying volley to take all three points, but that match proved to be Aurelio’s final act as Sailors Head Coach with the Australian leaving to pursue other opportunities.

Under-21 Head Coach Robin Chitrakar took interim charge, but the Sailors marched on, defeating Geylang 2-1, Tanjong Pagar 3-1 and Young Lions 1-0 to stay on course. Chalking up six straight wins meant they were now the most credible challenger to Albirex’s crown.

At the halfway mark of the season the Sailors were just a point behind the White Swans.

The Sailors landed Ulsan Hyundai’s Asian Football Confederation (AFC) Champions League (ACL) winning coach Kim Do-hoon on a two-and-a-half-year contract to take over the reins in what was a coup for the club.

Having won the 2020 ACL, his credentials were never in question, and he wasted little time in getting down to business. Placing a huge emphasis on physical training and focusing on building up a robust defence to complement the Sailors’ highly-attractive attacking style, the players clearly needed a bit of time to adjust. 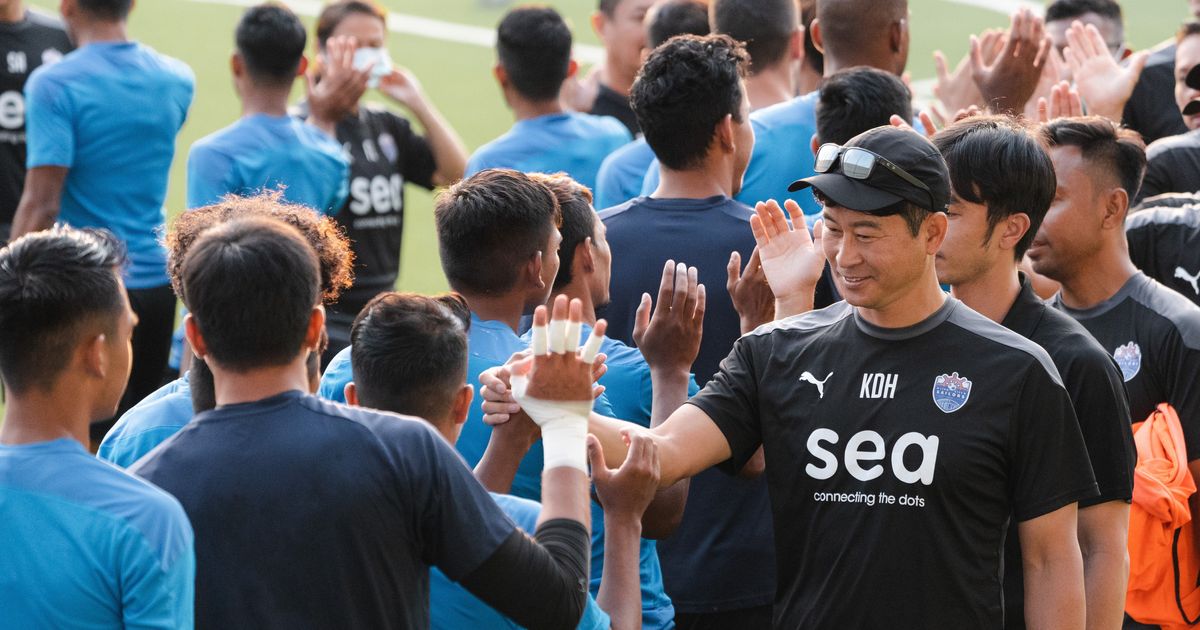 Starting off his tenure with a gritty 1-1 draw away at Albirex, Kim’s second game in charge did not exactly go as smoothly. They needed a 95th-minute penalty from Stipe Plazibat to scrape a 1-1 draw against Balestier. With no wins in his first two matches, the pressure was definitely on, but the South Korean picked up an impressive 4-1 victory over Tampines next for his first win in charge.  His tactical nous came to the fore, with his plan of pressing from the top and pressuring the Stags into defensive mistakes working a treat.

Hiccups before finally reaching the summit

That was followed by a 2-1 victory away at Tanjong Pagar, before the Sailors were frustrated by a defensively-resolute Hougang side in a 1-1 home draw. Faris Ramli’s goal-bound shot was agonisingly cleared off the line deep into injury time as the Sailors found themselves five points off the pace with five matches to go.

The Sailors were then given a huge scare by Young Lions as they trailed 1-0 at half time. A loss would have seen them fall eight points adrift of Albirex, but they dug deep and found steel, making the breakthrough with a rare Jorge Fellipe double and triumphed 3-1.

Then came the most important game of the season – the Sailors needed to beat Albirex in a top-of-the-table clash to swing the title pendulum their way.

Kim’s charges led for 70-odd minutes after Haiqal Pashia’s opener, but a loss of concentration in the final minute of injury time allowed Ryoya Taniguchi to head in the equaliser. That goal seemed to have all but ruined Sailors’ championship hopes. Albirex needed to drop points in either of their final two games for the Sailors to stand any chance of winning their first trophy, and that appeared unlikely. 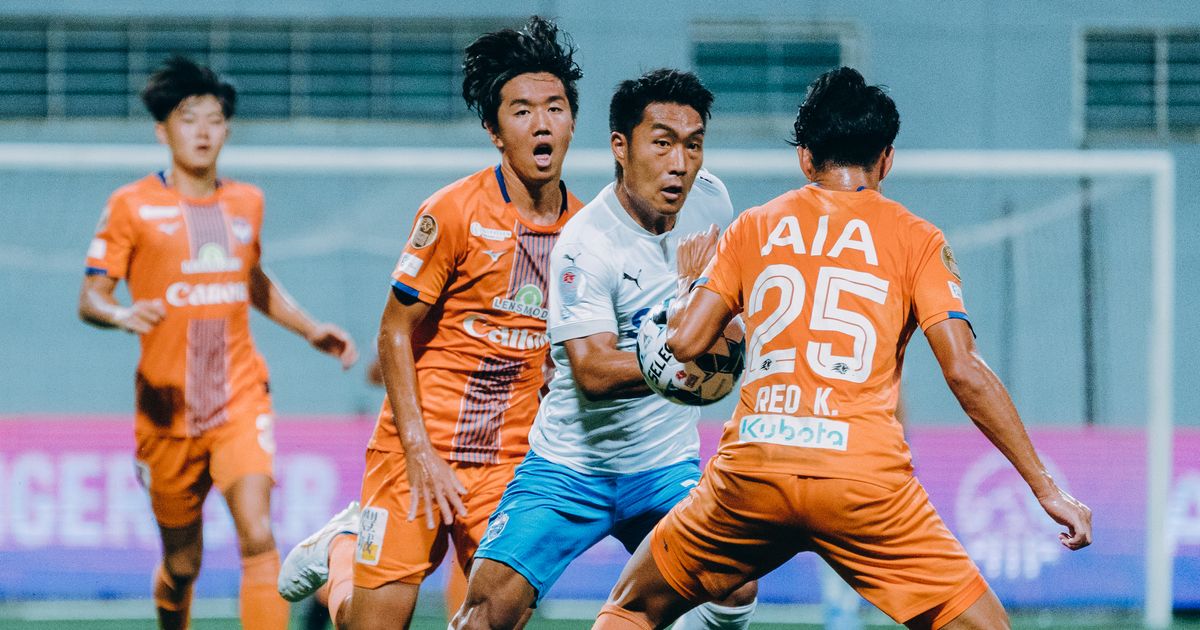 The Sailors brushed off disappointment and focused on what they could control, blitzing Tampines 6-1 away in an incredible team performance just days later. The win narrowed the gap to Albirex to just two points going into the final two rounds.

And the unlikely did come to pass on Matchweek 20.

Albirex were held to a shock 0-0 home draw by a determined Tampines side who were out to put their torrid run of form behind them – a result not many saw coming. The Sailors were handed a golden opportunity to regain the title initiative and they did not waste it with a professional display to dispatch Geylang 3-0. The victory meant they leapfrogged the White Swans to go top based on a superior goal difference heading into the final round of fixtures on 10th October.

Remarkably, that was the first time the Sailors have ended a matchweek atop the SPL in 2021 and they were not about to relinquish their position easily.

On an enthralling final-day that saw tickets sell out hours before kick-off, the Sailors got off to a good start with Song turning home the opener, but were then stung by a shock Tigers equaliser through Aidil Johari. But Gabriel’s goal just before half time settled nerves and they would eventually wrap up a 4-1 victory through Lopes and a second Gabriel goal. 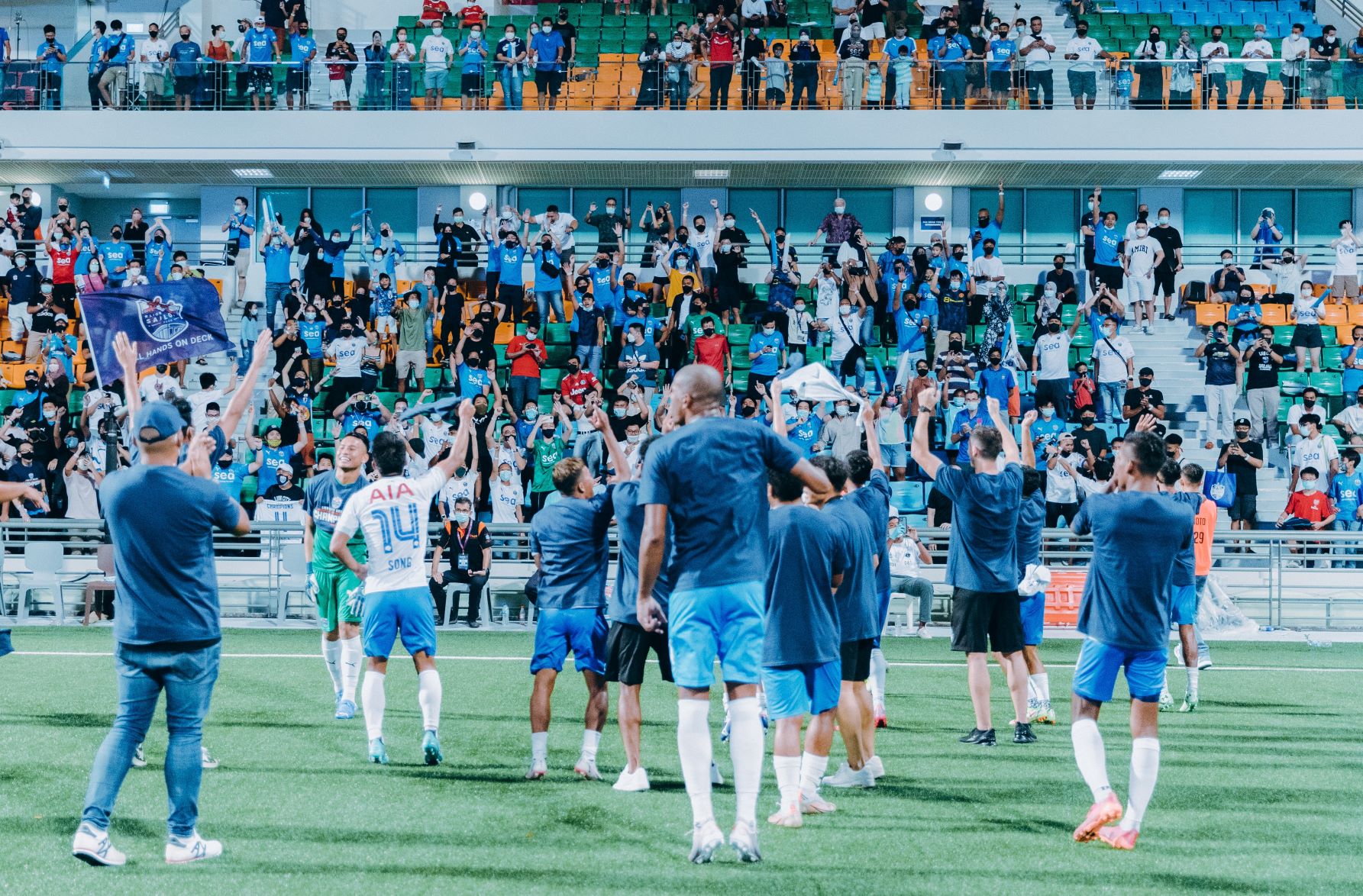 The Sailors became SPL champions on the back of a club-record 18-match unbeaten run.

The players’ attention will now turn elsewhere – some are taking a break while others will report for international duty at the year-end AFF Suzuki Cup. But once the Sailors come together again, eyes will be focused on building on the 2021 season and flying the Singapore flag in the region when the Sailors make their ACL debut next year.