The Lion City Sailors were not at their best on Sunday night, having to dig deep to come from behind and overcome a spirited Young Lions side 3-1 at the Jalan Besar Stadium.

With that, the Sailors extended their unbeaten run to 14 matches and whittled the gap between them and leaders Albirex Niigata (S) down to five points, with one game in hand.

Perhaps more importantly, the result means they will go into this Friday’s big game against the White Swans with the destination of the Singapore Premier League (SPL) title still in their own hands.

Win that, and the other remaining three games, and the Sailors will be crowned league champions for the first time.

The significance of the Young Lions win was not lost on Sailors attacker Gabriel Quak, who scored the team’s third goal a minute into injury time to seal a hard-fought victory.

“We knew that if we could not win this one, we’d be going into the Albirex game too far behind them, and they would have the upper hand,” reflected the 30-year-old. “This was a really tough one to negotiate, with the Young Lions playing exceptionally well in the first half.

“But ultimately football is a 90-minute game and I’m very proud of how our team fought in the second half – sometimes you just have to win ugly. Destiny’s still in our own hands and we have to keep it this way.” 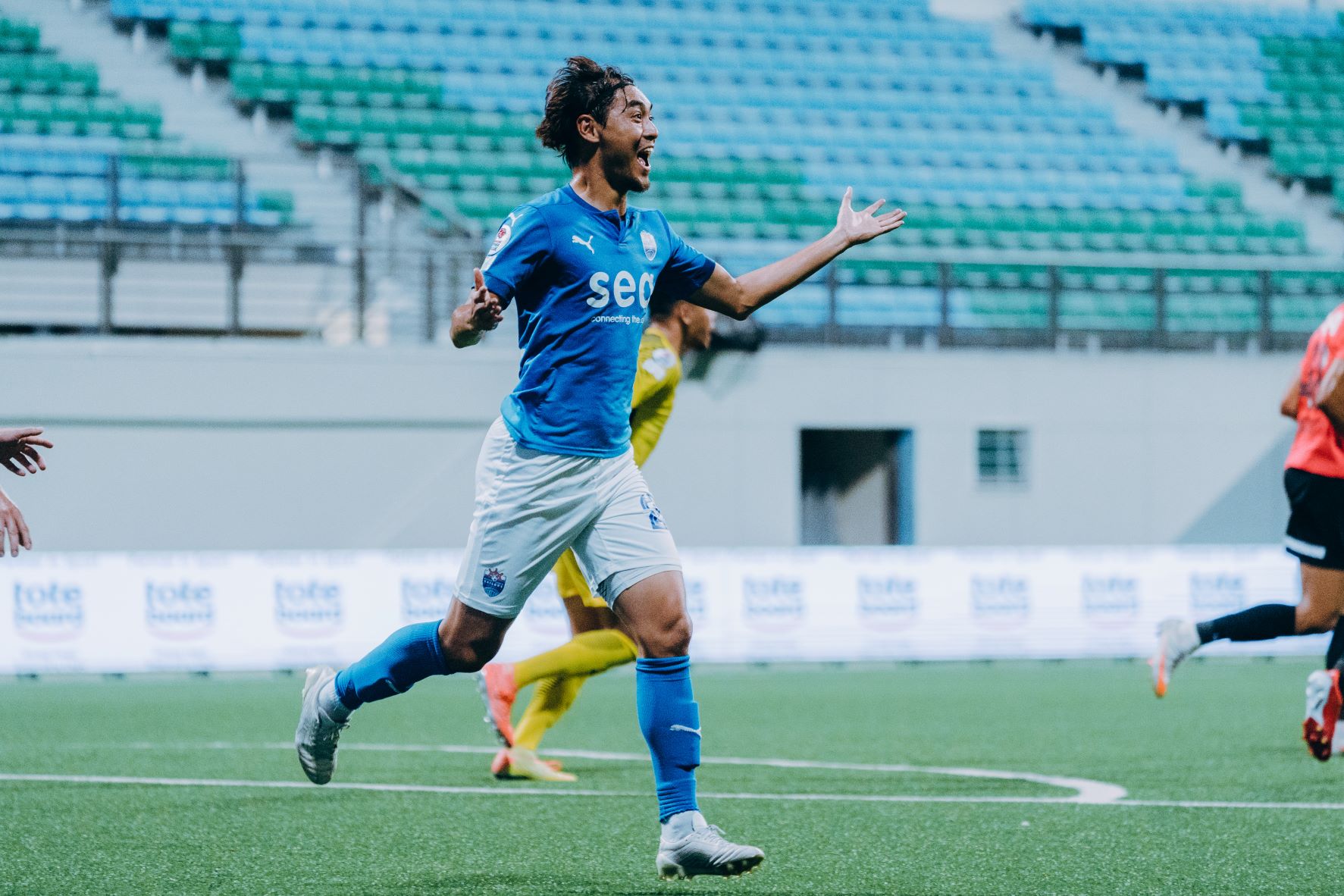 The Sailors have Jorge Fellipe to thank after a poor first half that saw the Young Lions go 1-0 up, courtesy of Ilhan Fandi’s 11th-minute header. The towering 1.9m Brazilian defender first netted the equaliser five minutes after the break, nodding home Shahdan Sulaiman’s pinpoint corner.

The Sailors then huffed and puffed but simply could not bring the roof down the second time, despite peppering the Young Lions’ goal with one shot after another. Stipe Plazibat did put the ball into the back of the net in the 65th minute when he headed in Diego Lopes’s cross, but it was ruled out for offside.

Stipe then had to be stretchered off following a crude Syahrul Sazali challenge on his left ankle, leaving the Sailors to navigate the final 10 minutes with a man less although the Young Lions were also down to 10 after Raoul Suhaimi’s 68th-minute dismissal.

Kim Do-hoon’s men looked like they would drop points for a second matchweek running, before big Jorge altered the complexion of the title race in the 85th minute, with one magical swing of his left boot.

Deployed upfront for the majority of the second half, the 32-year-old was sprawled on the ground after seeing his goalbound header parried away by Ridhwan Fikri. But he was quickly back up on his feet to meet Tajeli Salamat’s delicious right-wing cross with an equally sweet first-time volley into the bottom left corner to put the Sailors 2-1 up.

Tearing off his shirt in celebration as the Sailors fans went delirious in the stands, Jorge described it as “the most important goal” of his career. 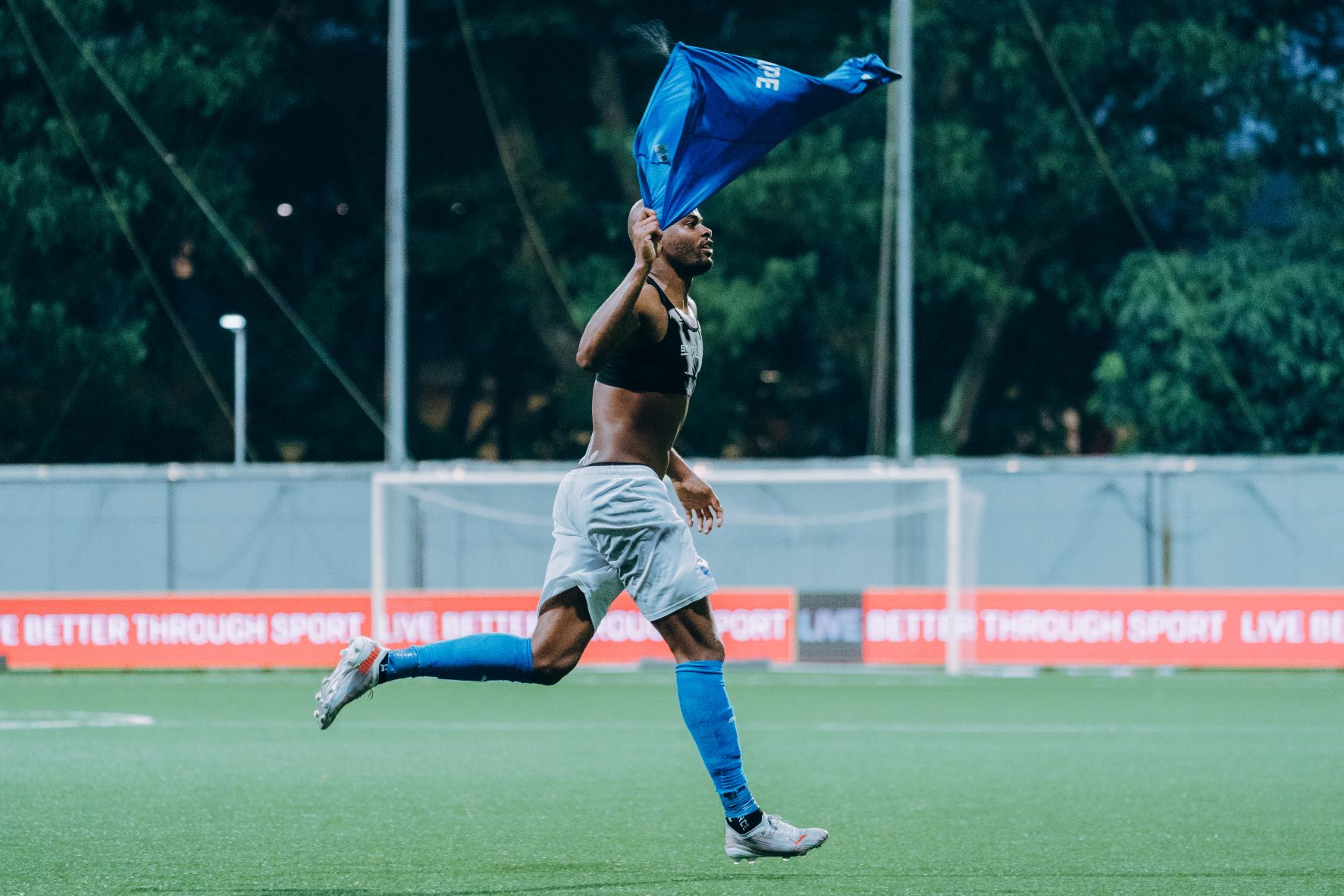 “I’m very happy to be able to directly contribute to the team. I’m a team player so it’s very important for me to do something to help the team win a difficult game,” said the defender who scored two goals in a game for the first time in his career.

While many were surprised to see Jorge finding space at the far post to score with his feet – not his head –  the man himself revealed it was something that he and the team had worked on during training.

“During the week, I was training for this kind of situation and I managed to score a couple of goals like that in training,” he shared.

“When I realised Taj was in the same position as we practiced, I signaled to him that I wanted the ball and I positioned myself to receive it as I did in training. Once the ball came towards me, I was very confident I was going to score.” 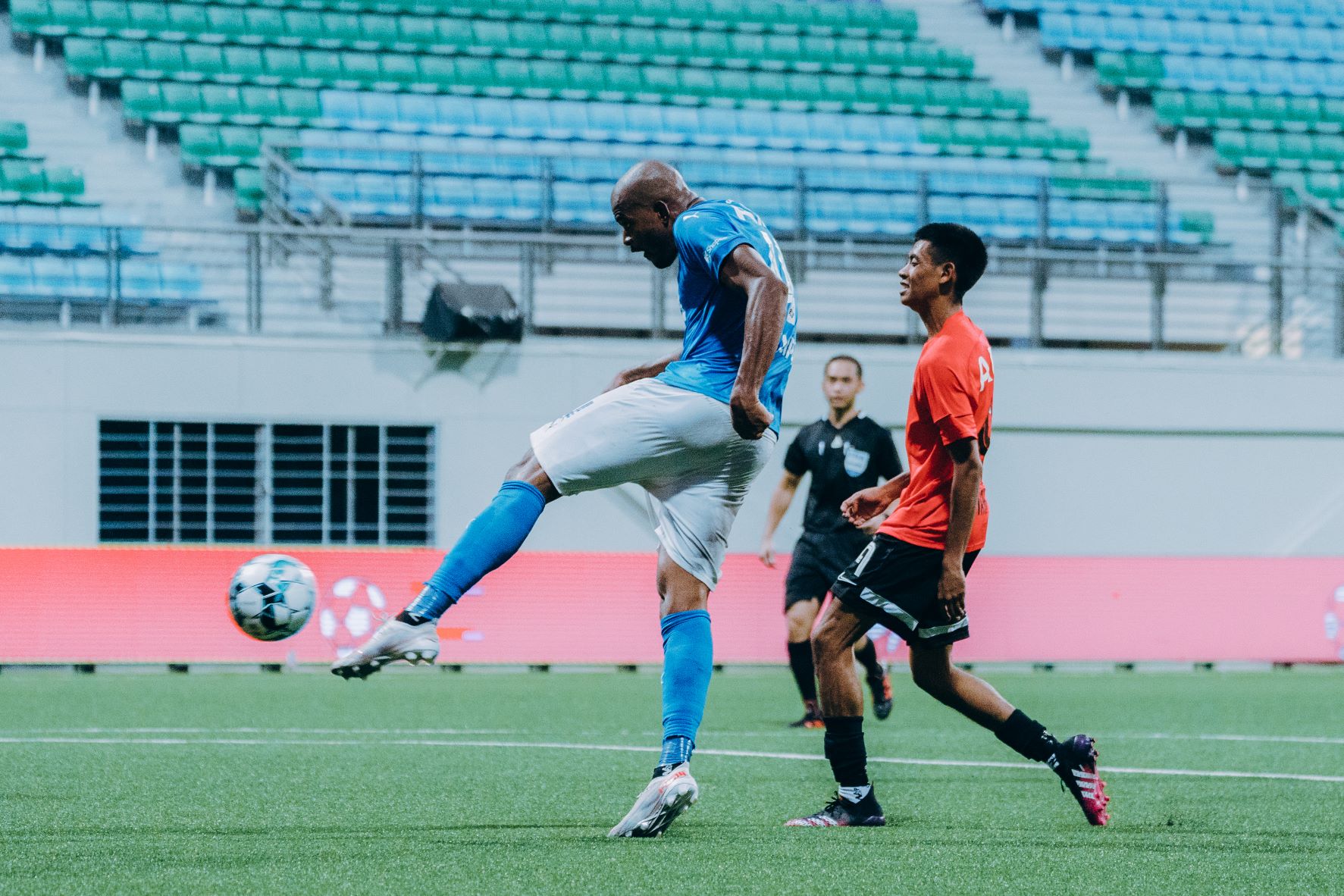 Gabriel then put the result beyond doubt late on as he calmly finished beyond Ridhwan after some quick thinking from fellow substitute Faris Ramli who played a quick free-kick to put him through on goal.

That was Gabriel’s 10th goal of the season, the first time that the 2020 SPL Player of the Year has hit double digits in a league campaign. While happy to have achieved the personal target that he set for himself, Gabriel is focused on the bigger picture.

“Huge credit to Faris – the moment he won the free-kick, we made eye contact and we knew at that moment what we wanted to do,” said the Singapore international, who also has three assists to his name.

“I’m definitely pleased to hit double digits as I’ve always said attackers are always judged based on goals, but I also hope people can recognise not just the numbers, but also my overall play and contribution to the team,” he said. “The most important thing is that what I do helps the team cross the finish line to win the championship.” 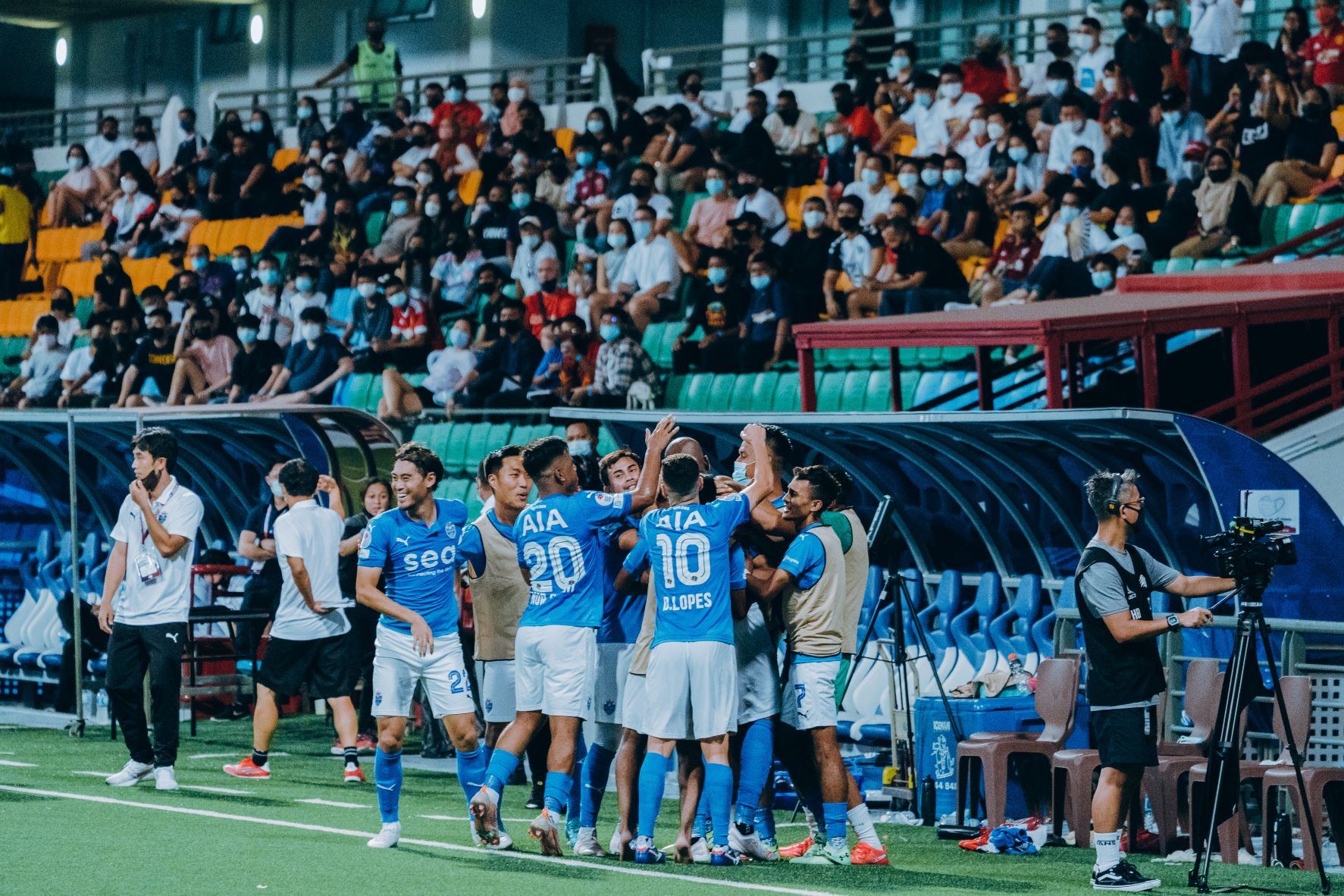 The Sailors have displayed an ability to come from behind to claim points in recent games – they have done so in four out of the six outings under Kim – illustrating the team’s indomitable fighting spirit, but Gabriel believes it is something that should not continue to happen.

“It’s always enjoyable to come from behind to win, but if you look at the bigger picture we’re always trailing and that’s not good, is it? How many times do we want to go through this before we get punished?” he questioned candidly.

“We have to learn from this. Hopefully this result against Young Lions is the turning point and can give us the spring going into our final four games.”

The victory was slightly dampened by Stipe’s ankle injury, which looked bad despite him hobbling back onto the pitch in the final few minutes to complete the match, and it remains to be seen if he will be passed fit in time for Friday’s big game against Albirex.

“I just hope it’s not as serious as we thought and everyone in the team wishes him a speedy recovery,” said Gabriel. “He’s a very important player for us so we hope he comes back into action soon.” 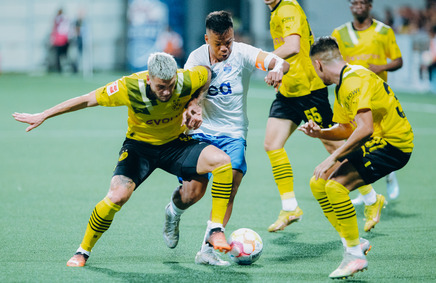 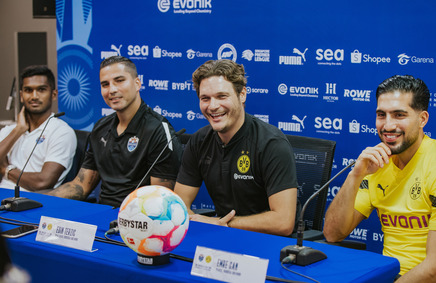 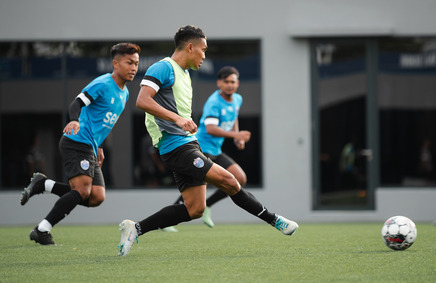 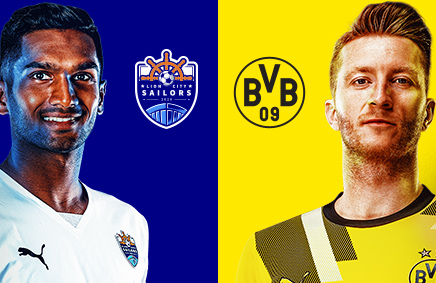