The Singapore Premier League (SPL) is set for an imminent restart, and the Lion City Sailors have been training on the pitch striving to be in the best shape to challenge for the title this season.

But one Sailor has been conspicuously absent from these sessions – full-back Ho Wai Loon.

Instead of being out on the pitch with his teammates, the 27-year-old has been forced to stay at home in a cast, after he sustained a right ankle fracture early last month.

The injury, which occurred during our second full training session, was severe enough that Wai Loon had to undergo surgery on his ankle the very next day.

“We were having possession training, and during one passage of play, I slid in to try and block a goal. But my right ankle got stuck in the ground, while the momentum carried me forward, and I suddenly heard a loud crack,” said a disappointed Wai Loon, recalling the painful incident.

“I knew immediately then that it was a bad injury, and that I’d be out for a long time.”

His recovery is estimated to take about four to six months, and the Singapore international will very likely miss a large chunk of the coming season, if not all of it.

After close to seven months without football due to Covid-19 measures, the left-footed Wai Loon was naturally upset at suffering such a serious injury, especially now with the season about to restart.

“It was a devastating blow for me,” said a candid Wai Loon. “Frankly, this year has not been a good year for me, football-wise. We only managed to play two games at the start of the season before circuit breaker started.

“Then just when things were picking up and we got back to full training, I suffered this injury, and will now have to miss another four to six months of football.”

Despite the ill-timed setback, Wai Loon is determined to maintain a positive mindset throughout his rehabilitation.

After all, he believes that the key to a better and faster recovery is to stay positive – something he learnt while recovering from an anterior cruciate ligament (ACL) injury in 2015.

“When I had my ACL injury, I realised that your mindset plays a very important role in your recovery,” said Wai Loon. “You have to be mentally strong, and stay optimistic. It is hard, but you cannot wallow in self-pity because it is what it is, and there’s nothing you can change.

“So, instead of focusing on the injury, focus on the recovery. That’s why I’m choosing to look at the positives of my injury now. I believe that things happen for a reason, and maybe because of this injury, it’ll allow me to reset, recharge, and come back a stronger player.”

As part of Wai Loon’s rehabilitation, he continues to work with the club’s trainers to keep active in order to maintain fitness.

“I had just one week of rest after the operation,” Wai Loon revealed. “Since then, I’ve been going for treatment and working with our trainers to keep my quadriceps and hamstrings active so that my fitness levels don’t go down too drastically.

“Thankfully, the recovery process isn’t as tough as when I suffered the ACL injury, and doctors say I can probably begin cycling in a month, which will help with my cardio fitness.”

It helps, too, that Wai Loon’s friends and family, as well as his teammates and coaches, have been hugely supportive and encouraging.

“After the injury, my teammates have been checking up on me often, and of course it helps knowing that they care and that I’m not alone in this,” said Wai Loon. “Their encouragement, along with the support of the coaches and the trainer who’s helping me with my treatment, makes me extra determined to work hard.

“I know they’re all waiting for me to come back, so I shouldn’t disappoint them. Having said that, I won’t rush my recovery too or I might risk getting another injury.”

And while we will be without Wai Loon – who was set to play a key role in our charge for the SPL title this season – for the majority of the campaign, the full-back is optimistic in the team’s ability to achieve success on the pitch.

“I’m confident that the direction we’re going is the right one,” Wai Loon declared. “The coach, the staff, the players are all pulling in the same direction, and everyone is doing well.

“I believe the team will perform well this season, and we will soon be able to show everyone our way of playing football. The morale is high among the boys, and everyone is putting in a lot of effort in training. So even for me, while I’ll be sidelined, I’ll still be there to support the team throughout the season.” 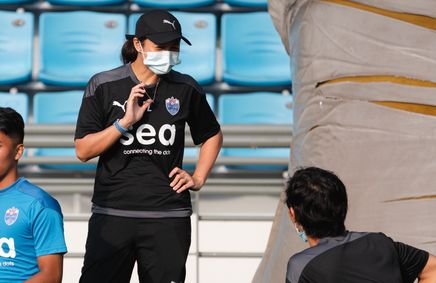 From the Bridge: Behind the scenes, but moving ahead of the game