In this piece, Sailors’ Football Academy trainees, Idzham Eszuan and Nathan Mao look back on a trip into the unknown and the lessons gleaned – about football and themselves.

At the start, it looked like it was going to be 42 long days away from the comforts of home and the safety net of parents, and into the clammy fingers of European winter – a big ask for a group of boys barely into their teenage years.

But the 13 and 14 year-olds in the Lion City Sailors Football Academy Under-14 Elite squad came back from the Sailors’ six-week Europe training camp in Germany and the Netherlands at the end of 2021 with broad smiles, a heap of invaluable experience under their belts, and a bagful of stories to tell.

“The first thing which I told my parents when I came back was that playing 11 versus 11 was so fun,” said  Nathan Mao, a Secondary 2 student at Zhonghua Secondary. “We were focused on our football but that didn’t stop us from having fun with each other every day… it really got the team spirit going.”

The trip was borne out of the two-and-a-half year partnership forged with Bundesliga outfit Borussia Dortmund (BVB) in July last year.

The team, led by Academy Director Luka Lalić, did well on the trip despite having not trained or played in the 11-a-side format for almost two years due to Covid-19 restrictions in Singapore. The boys acquitted themselves – even excelled – against high-calibre opposition collecting six wins and a draw over a total of 11 matches – defeating teams like FC Utrecht and BVB along the way. But the team gained so much more than just match experience. Spending a prolonged period together on and off the pitch, the players bonded more than ever before in their time as a team, enjoying their time so much that few were keen to return home at the end.

“Initially I thought it’s going to be very hard because this would be the longest time I’ll be away from my family, but my teammates made it so enjoyable,” said team captain Idzham Eszuan. “It was tough, but we went through it together.

“We woke up every morning feeling very excited and energetic – the weather was cold and we enjoyed having unrestricted training. It was just so nice to be away together and we got to know each other very well over the trip.”

More accustomed to Singapore’s warmer climate, the boys had to quickly adjust to playing in chilly conditions, against quality opponents no less.

Idzham, who plays as a centre-back, recalls several memorable moments including one that saw him nutmeg an opposition forward in his own penalty area and also having to step up to lead by example despite being soft-spoken off the pitch. 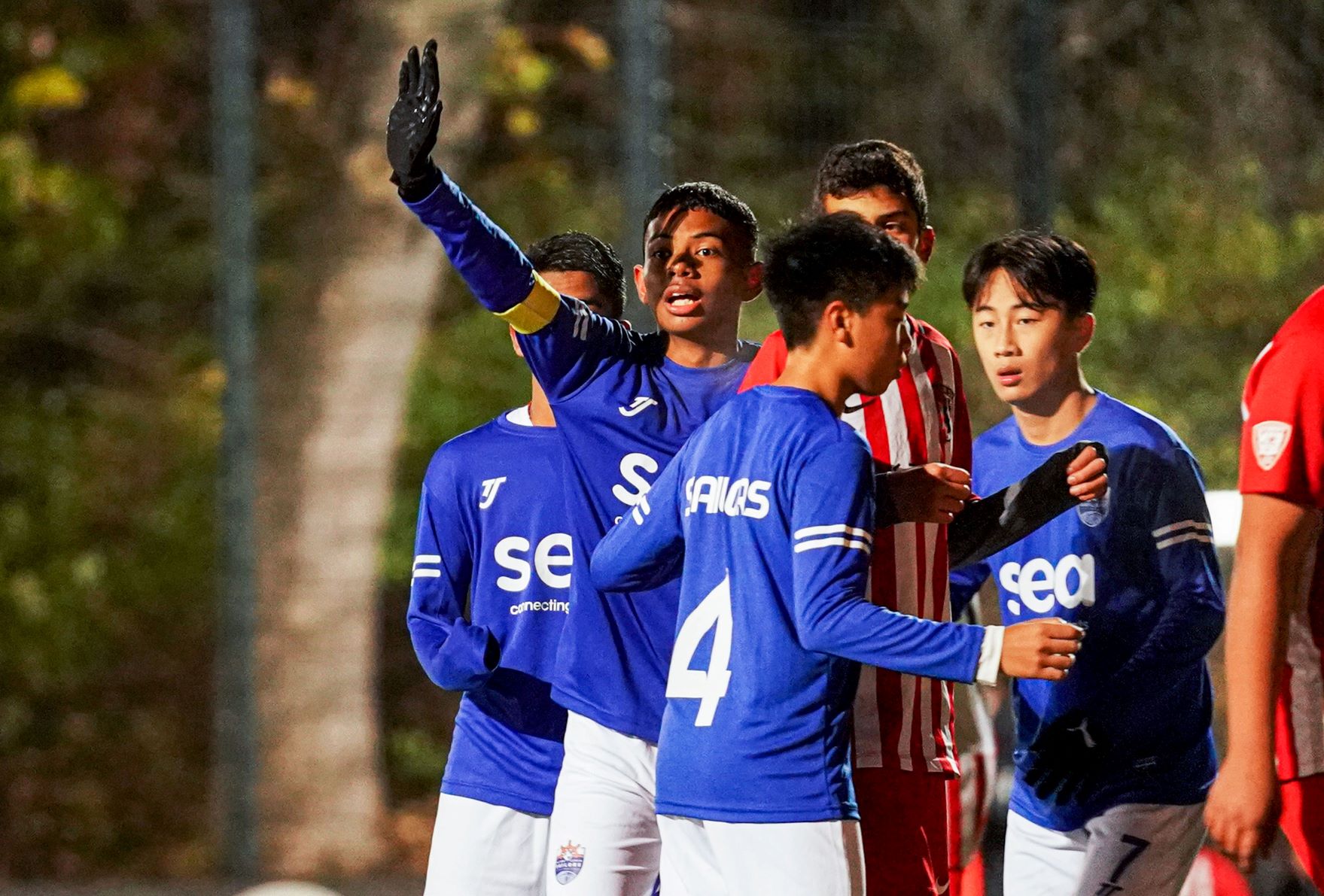 “Of course we feel down whenever we concede a goal or lose a match, but as a captain, I had to learn to keep my head up and lead so the team will follow suit,” said the 14-year-old, a Secondary 3 student at Westwood Secondary School.

“Some of us did feel a bit intimidated playing against some big teams, so before the game we just hyped each other up to make sure everyone of us was mentally ready to play the game. It was not just me, but it was clear that all of us learnt that we have to try and build up each other’s confidence during the game to make sure the whole team is at the same level.

“The first few games were tough, but we slowly got used to the tempo and everyone grew so much during the trip… My coaches were all surprised that I had the confidence to do such a thing (the nutmeg) and we celebrated like crazy after defeating Dortmund.”

Meanwhile Nathan, who plays as a forward, learnt how to cope against defenders of a bigger physique and how to recover from setbacks. 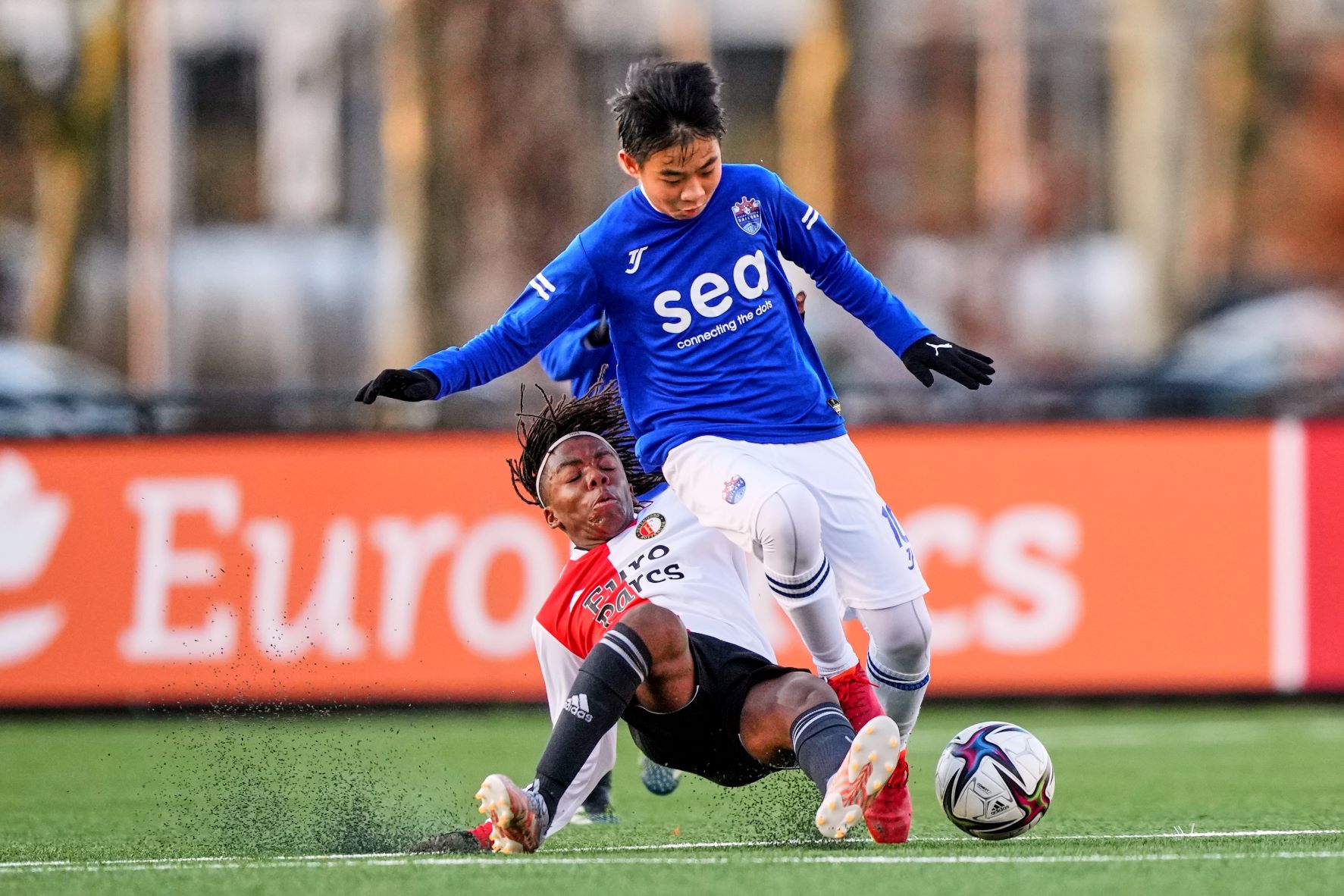 “For those opponents in the same age-group as us, the size difference wasn’t that big. But when it came to those who are a year older, the difference was suddenly massive,” noted the 13-year-old. “Most of their defences are very well-organised, so we had to learn how to create opportunities and be clinical.

“We actually played well against Feyenoord and were only down by a goal at half time, but we didn’t take a couple of opportunities and were so tired in the second half that we lost by a few goals. Against FC Dordrecht, it was our worst game – our mentality wasn’t there, our heads went down after conceding the first goal and we kept losing the ball because we were trying to force play. All these were valuable lessons for us.”

A battling draw against FC Cologne – leaders in the German domestic youth league – in the final match of the tour was one that showcased the team’s improvement and maturity over the course of the 42-day European sojourn.

Courtesy of the ongoing partnership between the Sailors and BVB, the boys had the opportunity to train in the famed BVB academy and even enjoyed a rare matchday experience in Dortmund’s iconic Signal Iduna Park – witnessing the massive clash between two of Germany’s biggest clubs with Bayern Munich prevailing 3-2 in a see-saw match.

The trip was not merely about football, but also about teenage self-discovery, getting the boys out of their comfort zone and encouraging the embracing of independence.

“We had to fold our clothes every day and make sure nothing got lost. In Singapore, I haven’t really had to do it myself,” admitted Nathan, who is an only child. “On the trip I had to make sure I was responsible and frugal, so that I didn’t spend too much money in the first few days and have enough left towards the end of the trip.

“Everyone was staying with a roommate so we had to learn to look out for each other. If you needed to use the toilet, you made sure you went in and out really fast so that your roommate could use it… we learnt little things like this.” For Idzham, one of the fondest aspects of the trip was being able to overcome his fear of heights. With the support and encouragement from his teammates, he managed to navigate high obstacles and ziplines during a visit to a climbing park in Rotterdam.

The Sailors’ U14 boys have returned to Singapore, armed with new perspectives and a new-found confidence knowing they have the ability to go toe-to-toe with top European players in their age-group.

This Europe training trip has also fuelled their football ambitions.

“It makes me feel like there’s a proper path to success and my dream can really be achieved,” said Idzham.

“It has really helped me understand the level that I’m at and how far I’ve to catch up to match the players in Europe – it was like a reality check,” acknowledged Nathan. “In the Sailors academy they’ve given us such a fantastic opportunity – putting together all the best players from our age-group, but then we go and play against all these amazing players in Europe and we’ve seen for ourselves what our level really is.

“That really challenged us and now we know what we need to do and how hard we need to work to get to that level.”