International Women’s Day is celebrated across the globe on 8 March, commemorating the cultural, political, and socioeconomic achievements of women.

In this special feature, we look behind the veil of Sailors women who continue to drive the club forward, to better understand their struggles, challenges and inspiration as they make their mark in the male-dominated Singapore football industry.

With firm eyes gazing over the green of the Matter Road fields, Chloe Alphonso barks out instructions with an air of authority that belies her slight figure. She demands nothing less than 100 percent focus from her trainees, because commitment and discipline are critical in sport, and it is also what she demands of herself.

The 25-year-old is one of the roses amongst the thorns at the Lion City Sailors Football Academy, and like for every trainer – or administrator – in the organisation, football is accepted as serious business, and every member must play their part for the team to succeed.

Football is a largely male-dominated industry in Singapore, but there are those like Chloe who stride freely in and carve out a space for themselves, breaking the bias with their personality, perspective, and commitment to the cause they have chosen.

The Sailors are blessed to have several such women in the club’s ranks, and on International Women’s Day, the Sailors celebrate their spirit and effort. 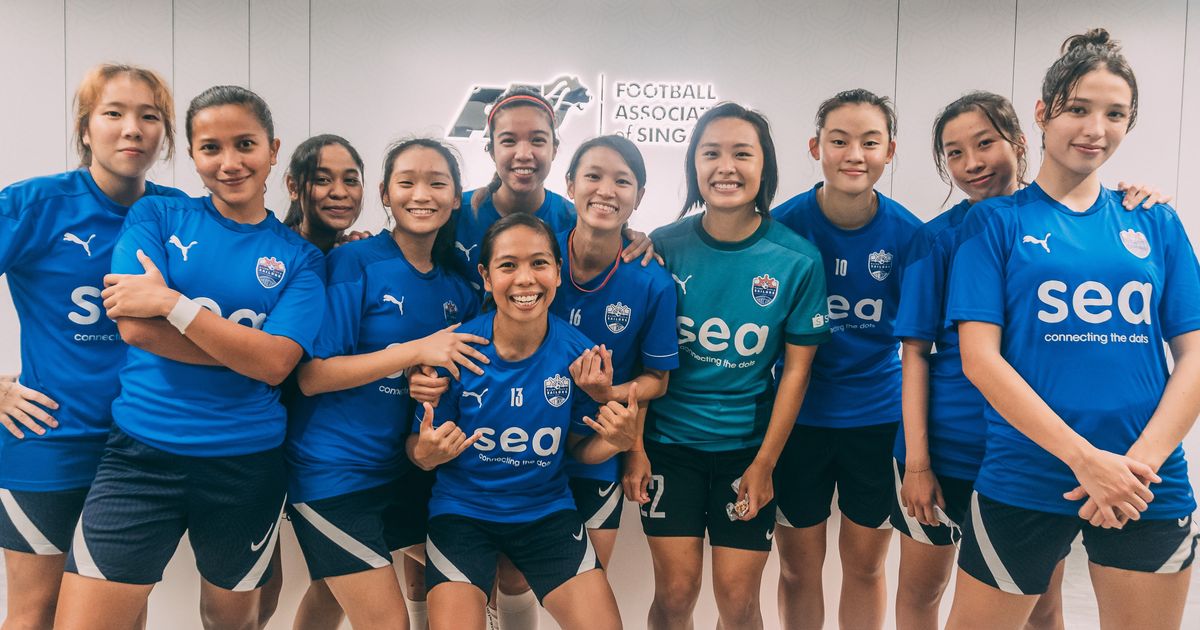 Chloe is a performance trainer who specialises in strength and conditioning (S&C). She assists the Academy’s Head of Performance Mark Onderwater and Lead S&C Coach Callum Liddle, and also has the responsibility of leading both gym and on-pitch sessions for the boys from the Under-10 squad all the way through to the Singapore Football League (SFL) team that will participate in Singapore’s amateur league.

Chloe admits her presence does draw attention and quizzical looks from some surprised parents, but she is confident that her presence is well-merited.

“Whenever I tell someone about my role in the Academy, their first instinct is “wow!” Jaws start to drop with eyes wide open, but I don’t take that as a bad thing,” said Chloe, chuckling.

“It’s good that people are impressed that more women are coming into the field and there are many others who are doing the same thing as I am at the elite level.”

Football remains a male-dominated sport, but the ground is shifting.

More and more females are getting into the game, at all levels, and in varying roles, and it is no different at the Sailors, a club that has embraced the expertise and contribution of women in the organisation.

Nurhafizah Abu Sujad is the Sailors’ Head of Physiotherapy, and also widely celebrated as the Florence Nightingale of local football, while Suzanna Foo is the acting Team Manager for the Sailors’ star-studded Singapore Premier League (SPL) team. And then there is Yeong Sheau Shyan who is perhaps the leader of the largest group of women within the club, she is the Head Coach of the Sailors Women’s Team.

Breaking through the wall

These ladies differ in areas of expertise, in personality and age, but have all faced similar barriers on their road into the sport, but they also share a similar commitment to push past obstacles to drive towards their goals.

Sheau Shyan struggled to land job opportunities when she first came into the scene in 2006 and only switched to full-time coaching some years later.

“There weren’t actually any coaching opportunities for female coaches, perhaps because schools and academies would rather have some “old uncles” who have a little bit of football experience than to trust a female coach – because they’ve never seen one before,” said the 44-year-old. 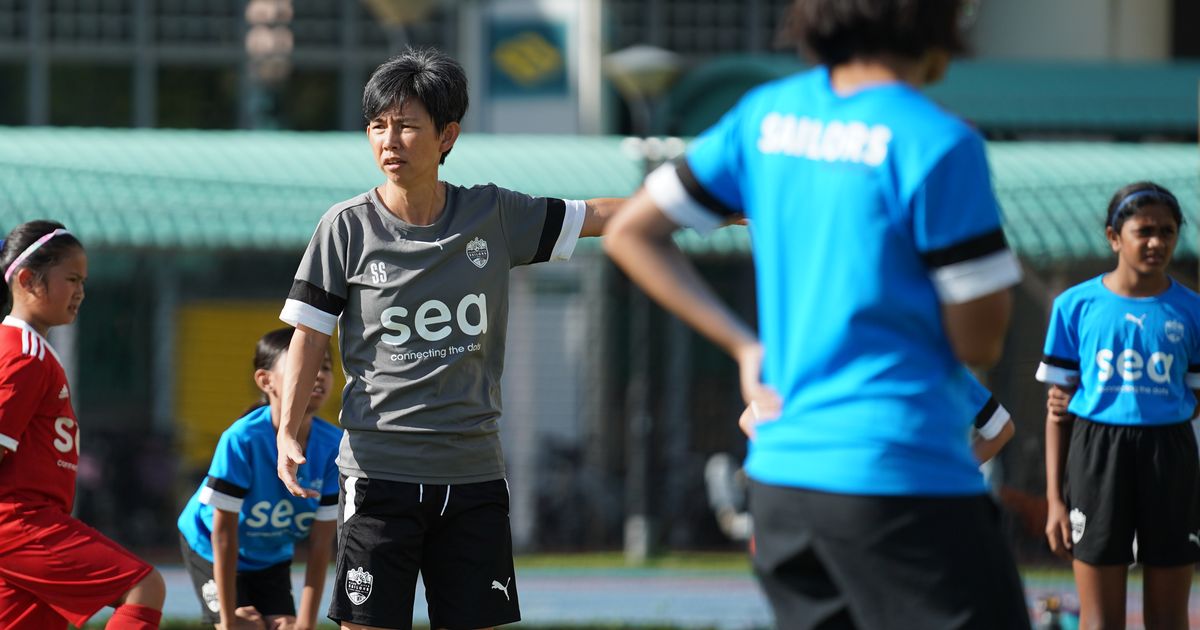 “It was difficult to make coaching a full-time career choice because you only had one or two coaching jobs to try and make enough to survive.”

For Chloe who started coaching at the LCS academy some five months ago, after graduating with a Masters in Sports and Exercise Medicine from a UK university, the stigma came earlier when she was a young aspirant in a local polytechnic and was often made to feel she did not belong in this field.

“People often go like “women in sport? Those don’t exist, oh, surely you should pick someone else”, or “women aren’t capable of doing the things that men are doing”. Even in university in the sport science setting, the ratio between women and men was quite obvious,” she revealed.

Suzanna’s struggles kicked off in the last millennium – the very year Singapore got its first professional league – but appear to sprout from the same roots. 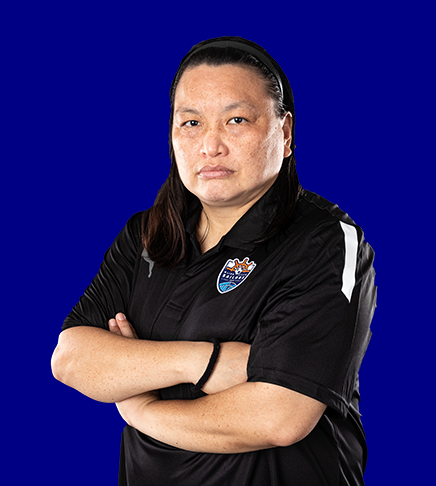 Since the S.League (now rebranded as the Singapore Premier League) was established in 1996, she has worked in football administration roles at the Football Association of Singapore (FAS) as well as at various local clubs’ senior teams and youth teams.

“Back in those days, fewer women were working in football so it was normal for the boys to think that we don’t understand this sport and they tend not to open up to women. They used to always believe that men should be the one in leadership roles and not women,” said the 47-year-old.

“Even my mum thought it was not suitable for me to work in football, so we needed to be very strong in our character and be firm in our beliefs. It required a lot of patience and endurance to handle all the issues that came our way in this line of work.”

The challenge of balancing motherhood and career exists for women across every industry, and it is no different in sport. Fizah is well familiar with the bias mothers have had to face in the working world. 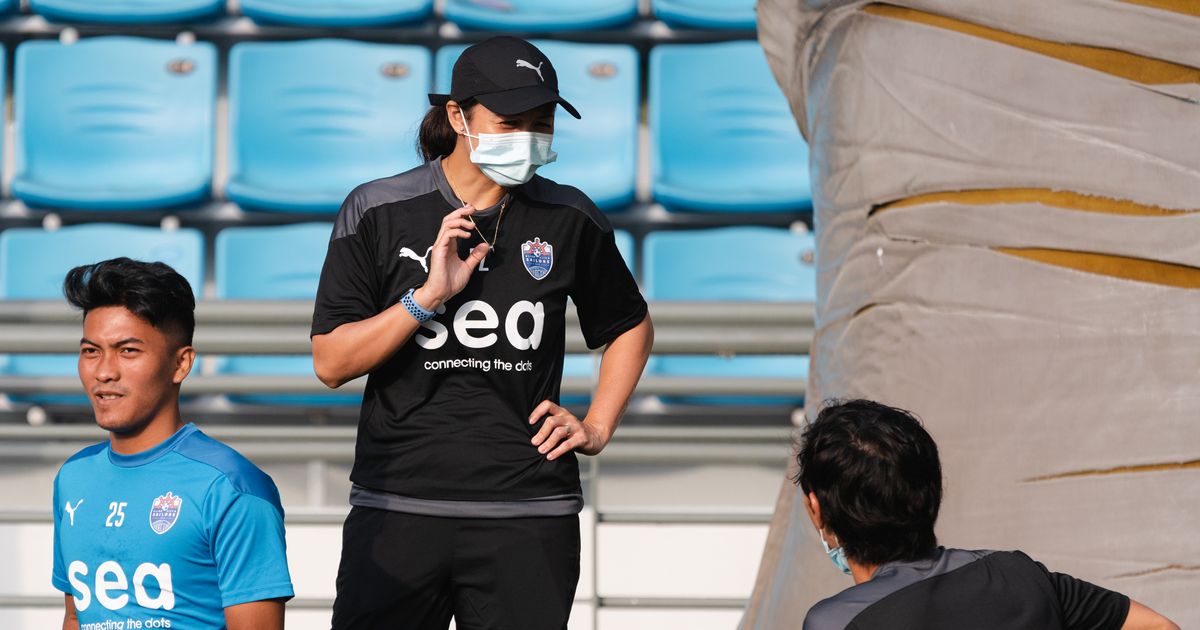 “When I first started as a physiotherapist in football – with the FAS – there were already preconceived judgments being thrown at me. I was a mother of two toddlers, and my prospective employers seemed to believe that I would find it challenging to work in the football environment because it would see a lot of travelling, and I would have difficulty managing work and family,” said the 40-year-old.

“I wanted to prove them wrong, that despite having a family, I can continue to do well at work while continuing to be a good mother to my children, and wife to my husband.

“Of course you miss birthdays and important events like sports days and kindergarten graduation when you’re travelling, but you make up for all that by being present whenever you have time with your family,” added Fizah.

For Suzanna, there is the obvious disadvantage of not being able to walk into the changing room as freely as she would like to and have a deeper conversation with her male players, but she works around this.

Chloe has found a method that has helped her along her own journey: to derive strength from lifting other females who are involved in sport. 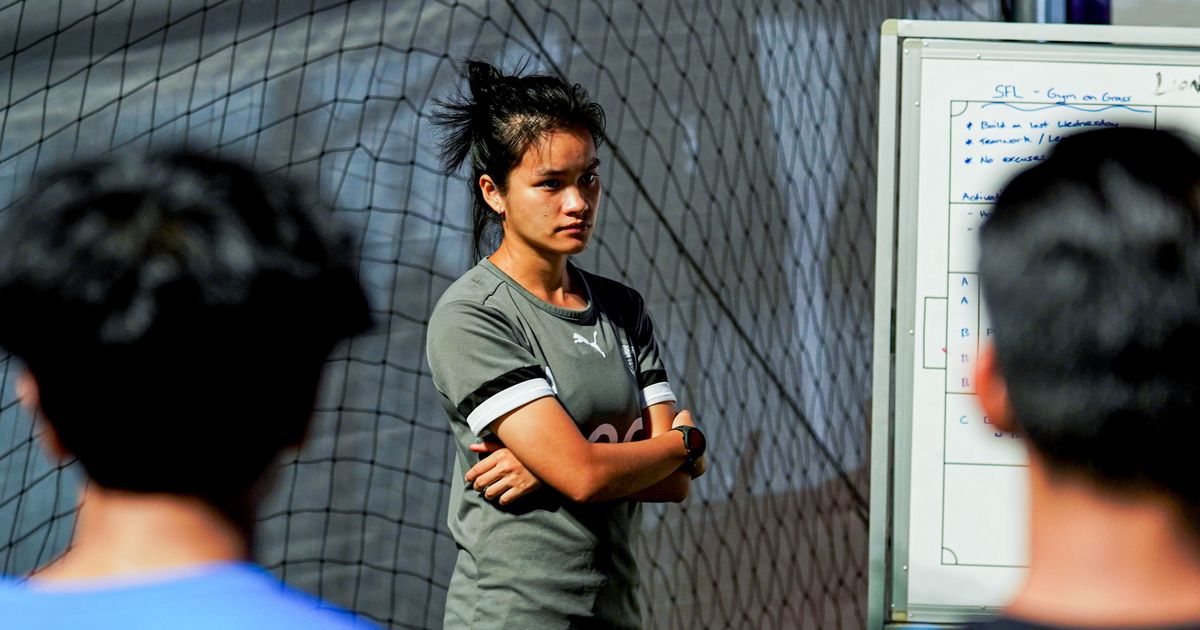 “Whenever I see someone, for instance a personal trainer in a different organisation, I always talk to them and give them support like: “hey, don’t doubt yourself! You can do it!” It’s important not to let anyone else tell us otherwise, we’re more than capable of doing the same thing – if not better than men.”

“Just by being around other females and giving them the motivation does a lot because I do need that from others at times as well,” she said.

On this path less trodden, these Sailors women find inspiration from varied sources, renowned female figures and people who matter most to them.

Chloe is driven by females working hard to succeed at the top level in various capacities, while Sheau Shyan’s coaching philosophy is very much shaped by experienced Dutch coach Hesterine De Reus, who came to Singapore a few years ago as a UEFA technical consultant to support the FAS’ Women’s Department.

In difficult moments, Suzanna always turns to her late father’s advice – to always be responsible at work.

“My dad was the one who inspired me to work in football, he brought me to the National Stadium to support the national team when I was young. He was the one who kick-started my love for football and encouraged me to stay on in the sport,” she said.

“He has passed on, but whenever I face any obstacles, I always remember what he said and will fight on.”

“To help support our large, extended family with at least three generations living in the same household, she worked as a babysitter for extra income. She assumed so many roles at the same time, in addition to being a mother, and that perhaps prepared me for what I was to face as an adult.” said Fizah. 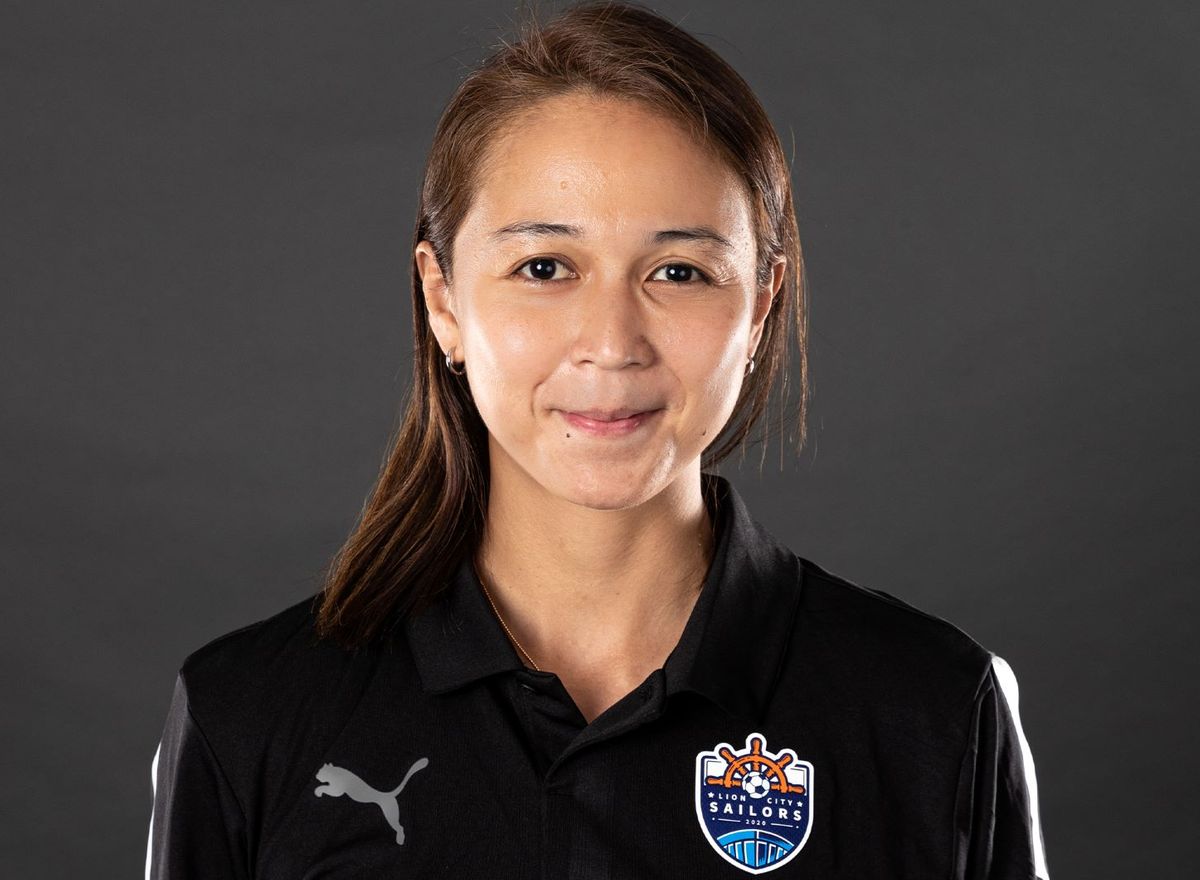 “Her perseverance and dedication to serve all of us really inspired me to do the same – to give more than 100 percent in everything that I took and to do better for those I cared about,” said Fizah, who has been blessed with a sturdy support structure at work.

“One of perhaps the most critical aspects of my career as it panned out was that the FAS came to be like my second family,” she added.

“With good rapport and communication with my colleagues, I know I can always depend on someone if I’m down or need to attend to things at home. My team knew when I meant business and what kind of quality of work was required, but they also knew that I was their friend, their sister. It’s this kind of environment that allowed me to succeed.”

As the world comes together to celebrate International Women’s Day (IWD) on 8 March, the 2022 IWD slogan #BreakTheBias means a lot to these Sailors women as they look to go even further in football. 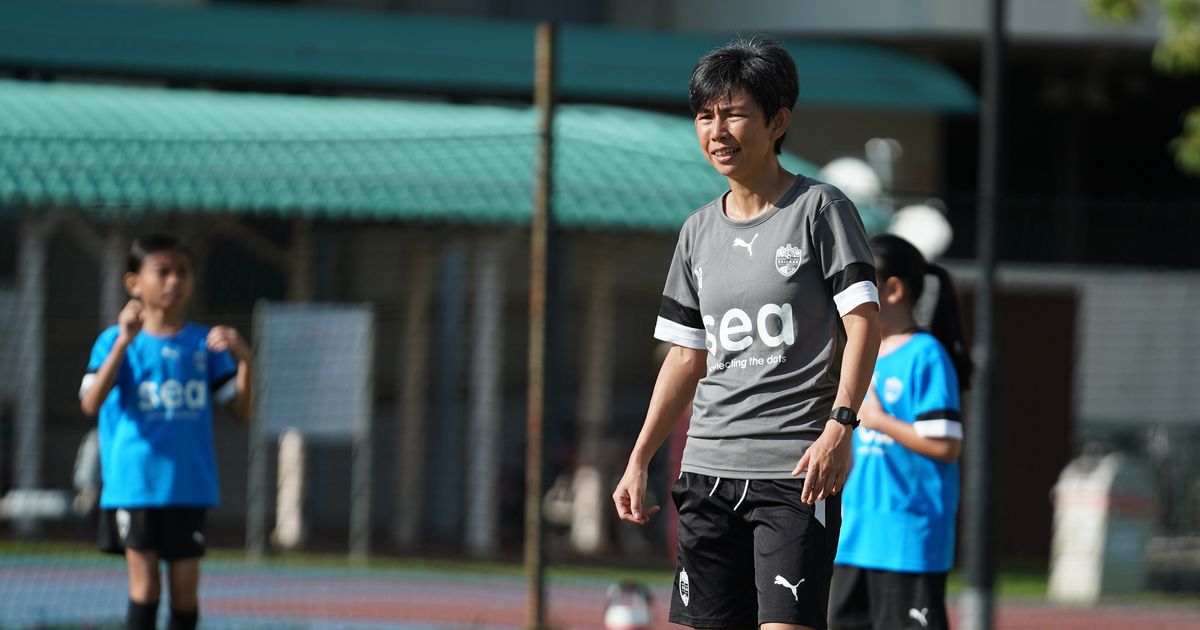 Suzanna and Sheau Shyan are happy that there is more awareness of the issues and challenges facing women in male-dominated environments, while Chloe believes things should go even further.

“Honestly, it’s like Valentine’s Day. Love should be celebrated every day – just like we should celebrate women every day!” she mused. “Having a day to highlight the significance of this just shows how much it takes to change the general mindset.

“I’m not belittling the significance of IWD, I just think it’s super important not for just our generation, but also past generations to slowly chip away and break down the stereotypes that women don’t belong (in various areas). We need all voices to speak up for women.

“For myself, I definitely aspire to become a Head of S&C or Head of Performance in the future. Seeing more and more females in this male-dominated environment, I’ve no reason to tap out and I know I just need to keep pushing to achieve my dreams.”

Fizah, who is already a leader in her organisation, believes the way forward must see females working to lift each other up instead of viewing each other as potential threats.

“We’ve to learn to team up in the spirit of mutual empowerment, to encourage and support one another. That way, we can make it more likely that we are all able to find success together,” said the former youth netballer.

“I live by my alma mater’s (Tanjong Katong’s Girls School) motto of “Moribus Modestus” – to be a modest individual, but still determined and purposeful in the things that I set out to do,” she said.

“The aim is to be the light that helps those around you to see, and to make a difference in their lives. This motto has kept me going, and it has been especially helpful, considering the nature of my work, when positive energy emanating from me can help those around me.”