Four different scorers, a clean sheet against one of the Singapore Premier League’s (SPL) in-form sides, equalling a club-record of six consecutive league wins and a nine-point lead established at the top of the table.

On Saturday (21 May) evening, the Lion City Sailors turned in a perfect response to harsh words from Head Coach Kim Do-hoon, beating title rivals Tampines Rovers 4-0 at Our Tampines Hub.

A week after a lacklustre display in a 1-0 win over Geylang International that disappointed Kim, the reigning SPL champions put in a fluid and commanding performance that blew the Stags away – and also reaffirmed their commitment to excellence and a continual development of the Sailors’ style of football.

With the team scheduled for a few weeks’ break due to a bye in the following SPL matchweek and the upcoming FIFA international window, Kim called for his charges to leave it all on the pitch, and they did just that. 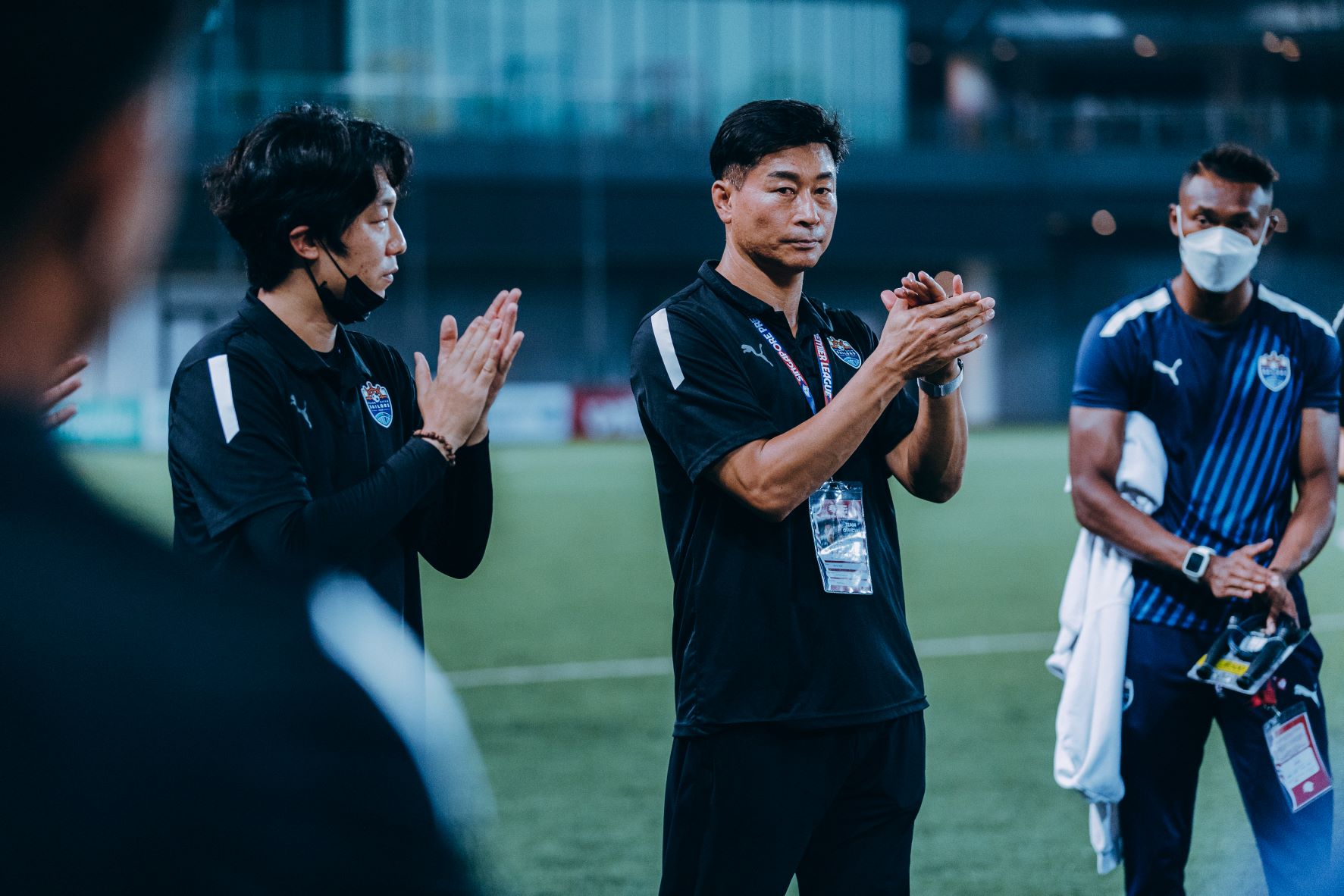 “Before the game, I told my boys let’s have a good game and pick up the points so that we can have a good holiday and enjoy time with our families. Full credit to them, they were brilliant today – absolutely fantastic,” said the 2020 Asian Football Confederation Champions League (ACL) winner with Ulsan Hyundai.

“I kept telling the team that we need to continue to develop and play better football after coming back from the ACL – and today the boys showed their quality and played exactly how we prepared. What’s more impressive is that we kept a clean sheet and that shows how strong we’re getting with each game.

“There’s nothing else I can ask from them and I’m really proud of them tonight.”

The Sailors tactician made five changes to his starting eleven, handing starts to Hafiz Nor and Nur Adam Abdullah in the full-back positions, while Singapore internationals Shahdan Sulaiman, Faris Ramli and Gabriel Quak also returned. 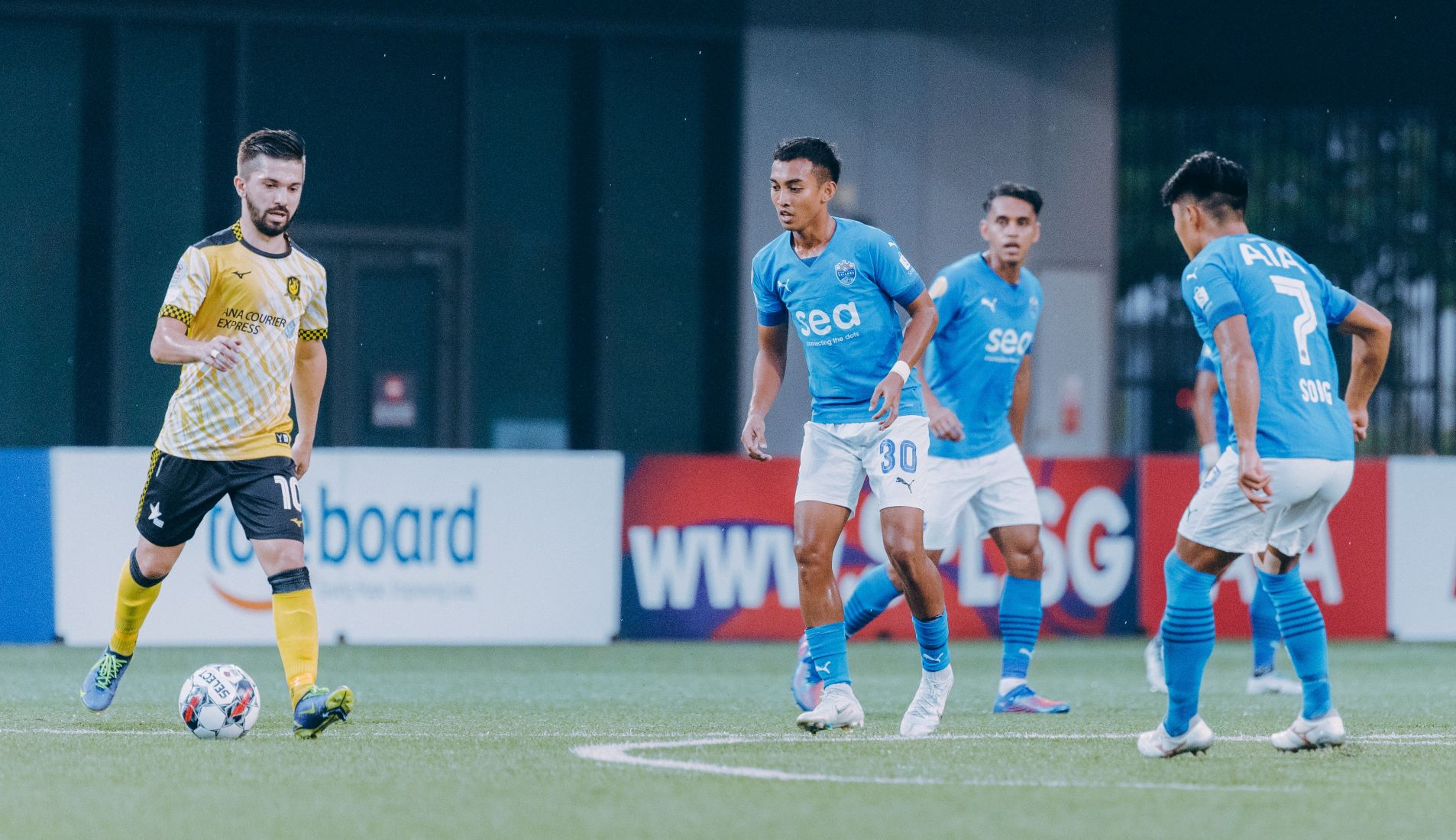 With kickoff delayed by an hour and 15 minutes due to the Lightning Warning System, the Sailors were itching to get going and took the game to Tampines in the opening stages, their high press causing some early jitters in the Stags’ backline.

The Sailors’ first real chance came in the 25th minute, with Song – deployed in the false nine role that he played to good effect at the ACL – being denied by Syazwan Buhari in a one-on-one opportunity.

The deadlock was broken 14 minutes later. After Faris won the ball back in the final third, Gabriel jinked past a couple of defenders on the right before unleashing a cross-shot that Ryaan Sanizal deflected past his own goalkeeper. 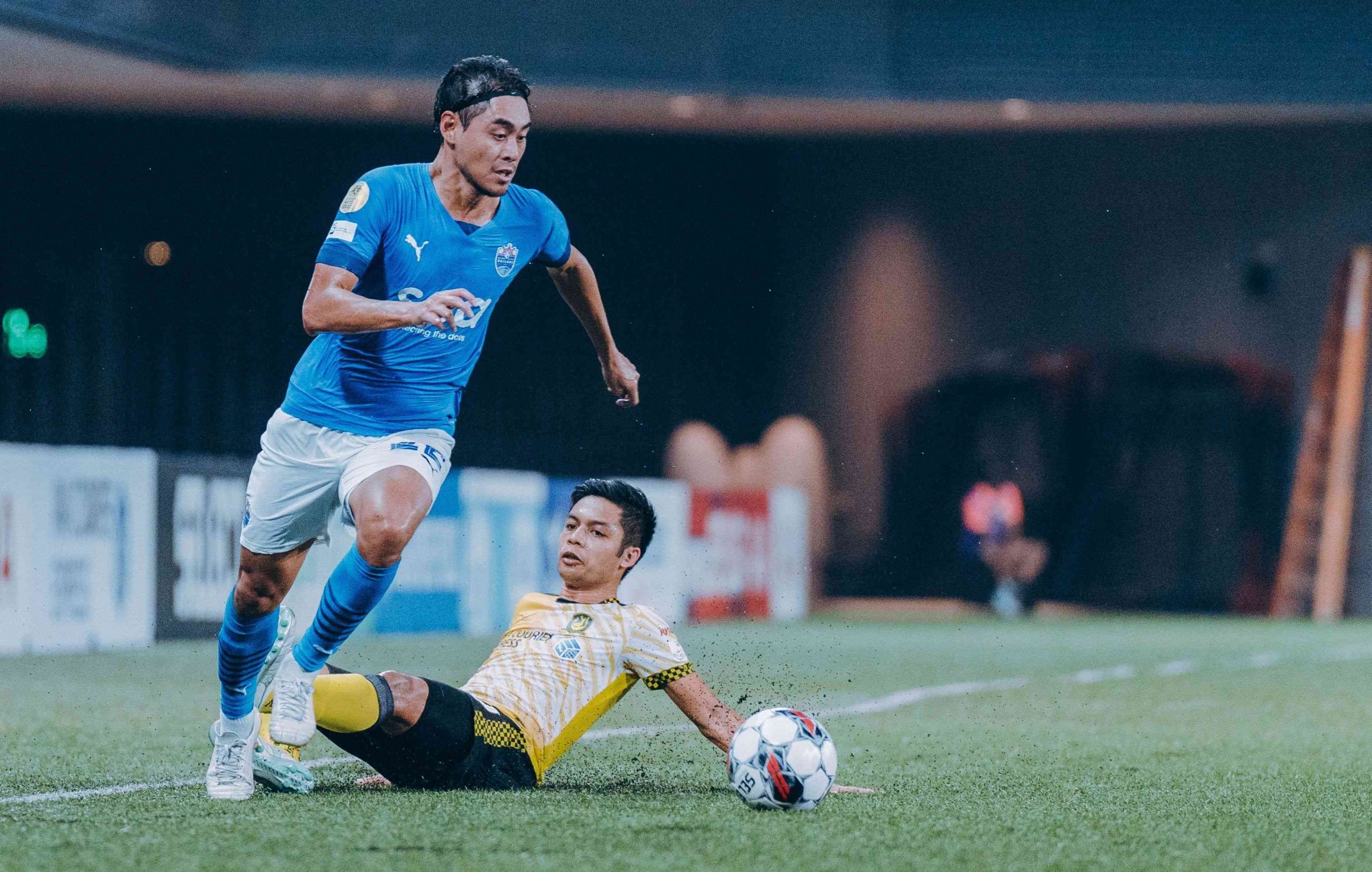 After going close on another two occasions just before half time, the Sailors carried the same intensity into the second half and continued to wreak havoc in the transitions, with Maxime seeing his fierce drive pushed around the post on 50 minutes.

Tampines’ top scorer Boris Kopitović – who scored 11 goals in his previous six outings – struck the outside of the post with his free-kick on the edge of the box soon after and he would live to rue that missed opportunity.

The Sailors went on to double their advantage in the 56th minute with substitute Haiqal Pashia making an instant impact. Introduced into the fray two minutes earlier for Gabriel, the 23-year-old raced down the right flank before whipping in a teasing ball for Maxime to divert in despite Syazwan’s best efforts to keep it out.

Kim’s men were beginning to go full throttle at that stage, with Maxime turning provider with a trademark cross to tee up Song for a firm downwards header from six yards out as the Sailors extended their lead to three 10 minutes later. 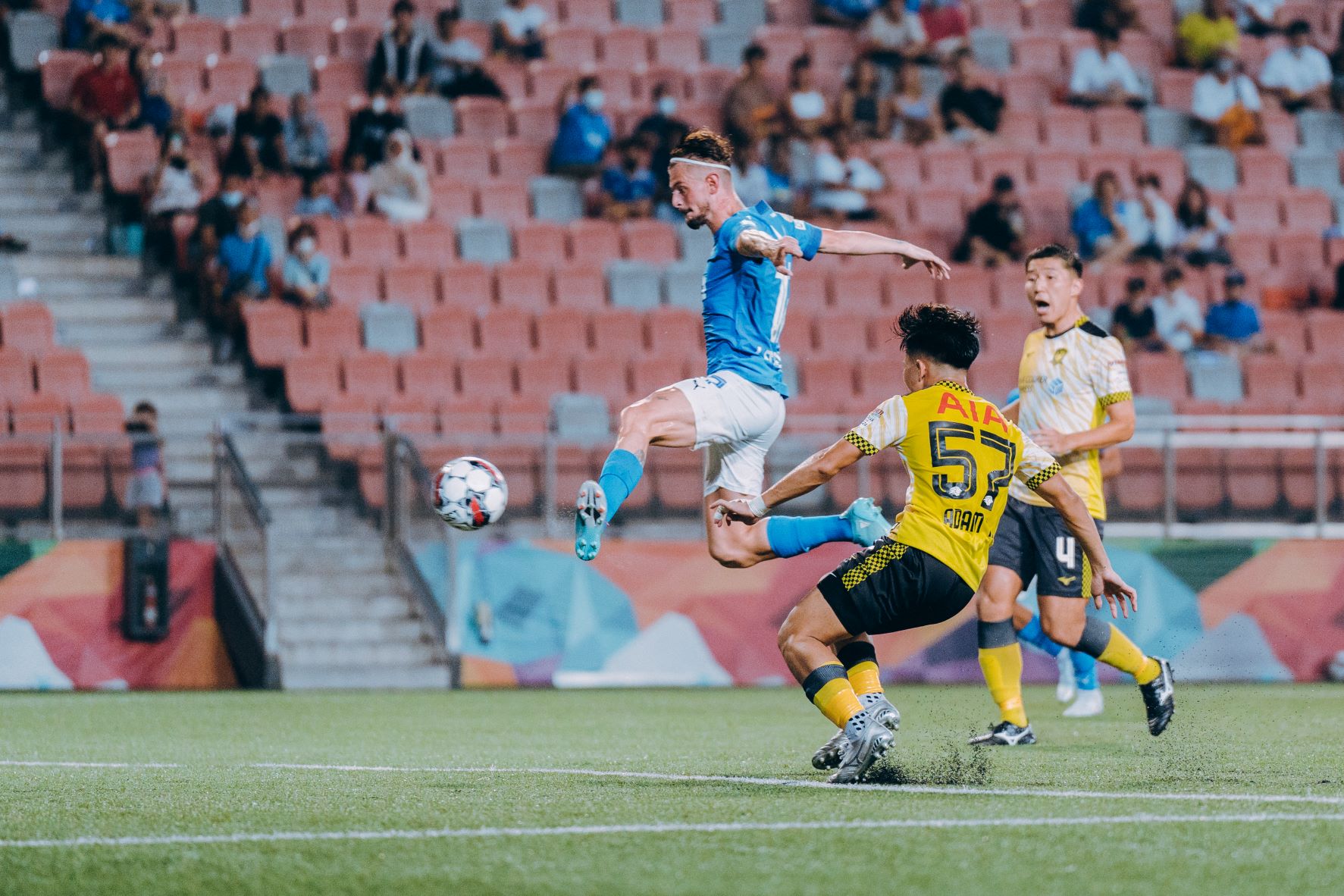 That was the Belgian winger’s seventh assist of the season as he continues to cement himself as the league’s top creator.

The rout was completed in the 71st minute, with Pashia taking a superbly-weighted Diego Lopes pass in his stride before slipping it past the onrushing goalkeeper for his first goal of the season, and rounding off a memorable appearance off the bench.

“Pashia’s one of the players who developed the most in this last year, and the speed of his development sometimes scares me,” said Kim.

“I’ve to give credit to him because he has put in a lot of hard work during training. He did exactly what we wanted from him in the second half – going one on one and using his speed down the line. But there’s still a lot more he can bring and I’m excited at what he can offer us.” 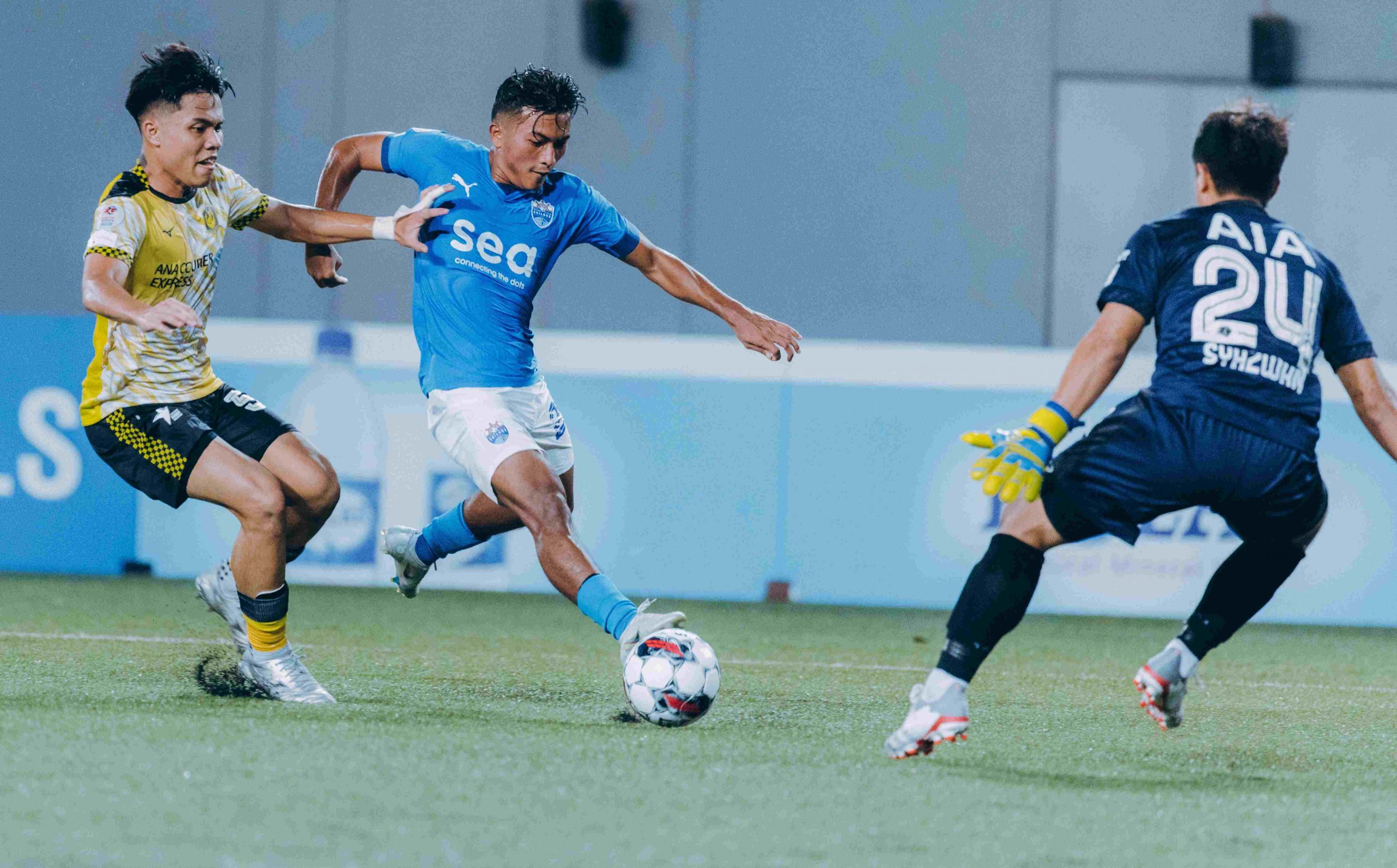 With Man of the Match Hariss Harun stoutly marshalling the defence till the final whistle, the Sailors preserved the clean sheet that was a fourth straight league shutout for Hassan Sunny since a six-match streak between July to August 2010 when he was a Tampines player.

The Sailors have now opened up a healthy gap at the top of the eight-team SPL standings, but Kim refused to be drawn into any title-winning talk and instead called for his side to continue in the same vein when they return to SPL action on 19th June against Balestier Khalsa.

“We have to perform not just for ourselves, but also for our fans. Hopefully there’s a lot more good performances for them to enjoy throughout the rest of the season.”